We’re entering the final days of the climate talks here in Copenhagen. And there’s no need to sugar-coat it: the outlook doesn’t look good. According to our friends at Climate Interactive, the cumulative result of all the proposals currently on the table would take the world not the 350 ppm that scientists say we need for a habitable planet, but all the way to 770 ppm. As Bill McKibben has been saying, "If that’s not literally hell, it will have a similar temperature."

Yet, despite the slim chances of an ambitious agreement here in Copenhagen, we’re taking hope from the growing number of countries that now support the 350 target and the call for real solutions to the climate crisis. Today, we got confirmation in a speech by Grenadian President H.E. Tilman Thomas that over 100 countries now support the call for 350ppm and a no more than 1.5 degrees Celsius temperature rise. "We must act now, because if we do not, history will not absolve us…" said President Thomas in a powerful speech on behalf of the Association of Small Island States, which 350.org has been working to build support for throughout the talks.

President Thomas’ remarks were amplified by a speech just moments later by H.E. Pakalitha Bethuel Mosisili of Lesotho, speaking on behalf of the Least Developed Countries (LDCs), who explicitly endorsed the 350ppm target on behalf of the LDC’s 49 member states. Here’s a picture of some of our Lesotho organizers to honor the occasion: 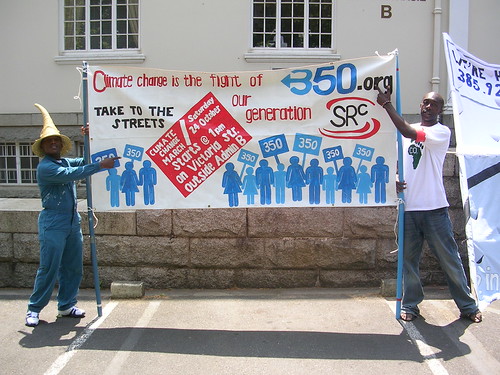 As Bill points out in a press release we’re sending out today: “A clear majority of nations at this conference have now come out in favor of a 350 target. These 100 countries show great courage–the kind of courage that comes when you realize your back is genuinely against the wall.”