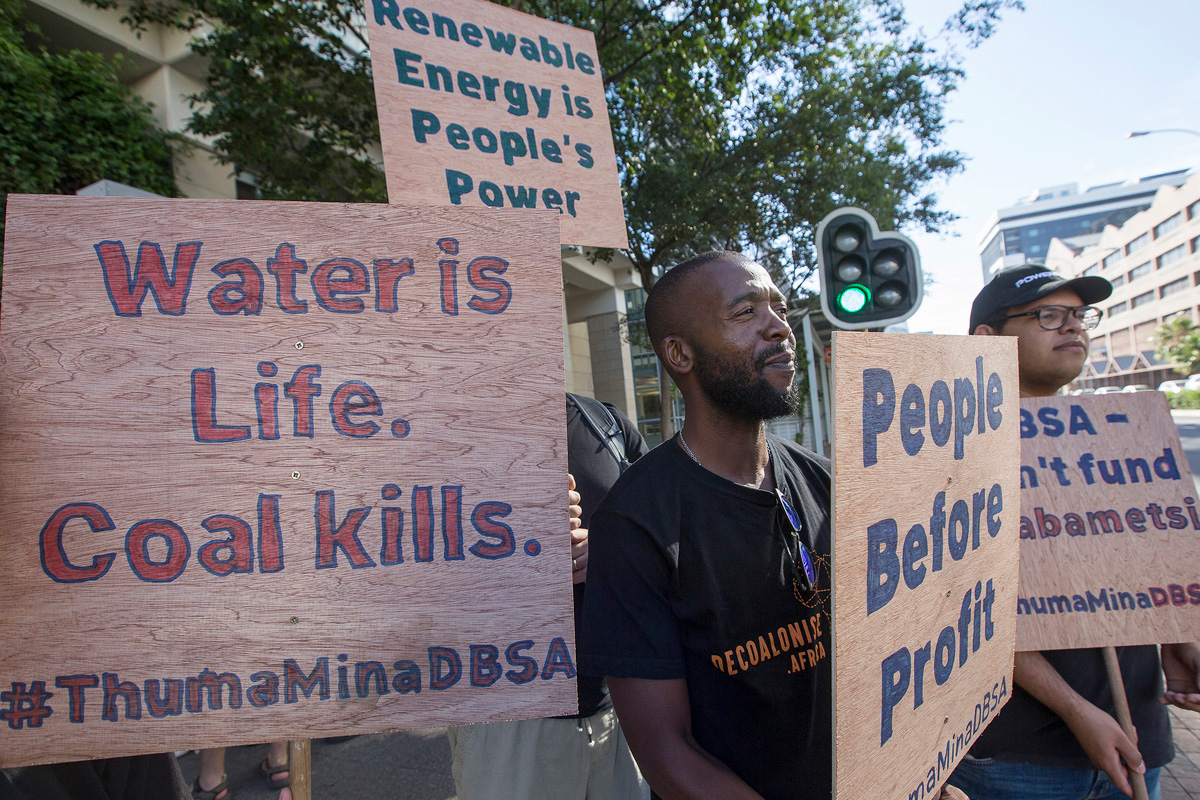 Keep It In The Ground: Fighting Fossil Fuel Infrastructure We’ve been teaming up with Indigenous partners, farmers and ranchers along the Keystone XL pipeline route and thousands of allies across the US who stand with them on the Promise to Protect — a pledge more than 20,000+ people have signed to show up in peaceful resistance along the pipeline route if and when they’re called there by Indigenous leaders.

We are encouraged that the US District Court ruled to vacate the cross-border permit for the Keystone XL pipeline, ordering TransCanada to cease all pre-construction for the project. The ruling states that the dismissal of President Obama’s previous decision against the Keystone XL pipeline by the Trump administration was unfounded and that a new environmental review is required.

We have invested more than $20,000 with partners to install more solar panels directly on the pipeline route in Nebraska and two mobile solar units in South Dakota last summer. We’ve used solar installation as an organizing strategy to get grassroots supporters invested in #SolarXL and stopping the project. The coalition of partners includes 350.org, Bold Nebraska, Native Organizers Alliance, Indigenous Environmental Network, and Dakota Rural Action. The campaign against the Kinder Morgan Trans Mountain pipeline in British Columbia seems to be heading for victory. Our team worked closely with First Nations and other partners to mobilize over 10,000 people in Vancouver to take action against the pipeline, with over 50 partner actions around the country days later.

We then escalated our action to pressure Prime Minister Trudeau to end his support for the pipeline and encouraged activists outside of Canada to contact their Canadian embassy about the pipeline. Over 21,000 letters went out to Canadian embassies around the world urging that Kinder Morgan’s Trans Mountain pipeline be rejected. We also saw an opportunity to inject people-power into the regulatory process and organized over 77,000 faxes (the only way the government enabled public comment) sent to the Canadian National Energy Board urging rejection during their review of the pipeline. While the pipeline still has to enter a lengthy review process thanks to court action, we’re working with our partners to keep up the pressure on both the company and Trudeau to reject this project. The Afrika Vuka (formerly deCOALanise) campaign continued to build the climate movement across the African continent now with eight groups working against the use of fossil fuels.

We organized a day of action called Break Free from Fossil Fuels in May, where activists from communities across Africa called on governments and businesses to put an end to fossil fuels and move towards a just transition to 100% renewable energy for all. In total, we organized 30 actions in 20 countries across the continent and brought in hundreds of new activists, government officials, members of the public, and faith leaders.

In South Africa, we launched our #ThumaMina DBSA campaign to stop the funding and construction of the mega Thabametsi coal-fired power plant. As one of the main financial backers, we’re calling on the Development Bank of Southern Africa (DBSA) to publicly commit to not fund the plant. We received media attention and got noticed by top officials in government. We continued meeting with the DBSA, held a petition delivery to show popular support for shutting down the plant, and escalated our call on the Minister of Finance to not fund the project. 350 Brazil, along with the Latin American Coalition Against Fracking (COESUS), has achieved over 350 municipal fracking bans in Brazil. There are anti-fracking campaigns active in 11 out of the 18 Brazilian States with areas available for fracking and 754 participating cities in those 11 States.

Our team staged a protest at a fossil fuel auction, which resulted in no plots to frack being sold and meant that 3.2 billion barrels of oil and gas were kept in the ground. The city of Peruíbe also made history — thanks to the local community with our support — by passing an amendment to ban all new fossil fuel developments. We also worked closely with Indigenous organizers and supported the 3,000+ strong 2018 Indigenous National Mobilization.

We continued supporting the anti-fracking work in Argentina with a regional coalition of partners, and since 2016, we have achieved at least 35 municipal bans and one provincial ban and stopped the construction of a nuclear power plant. 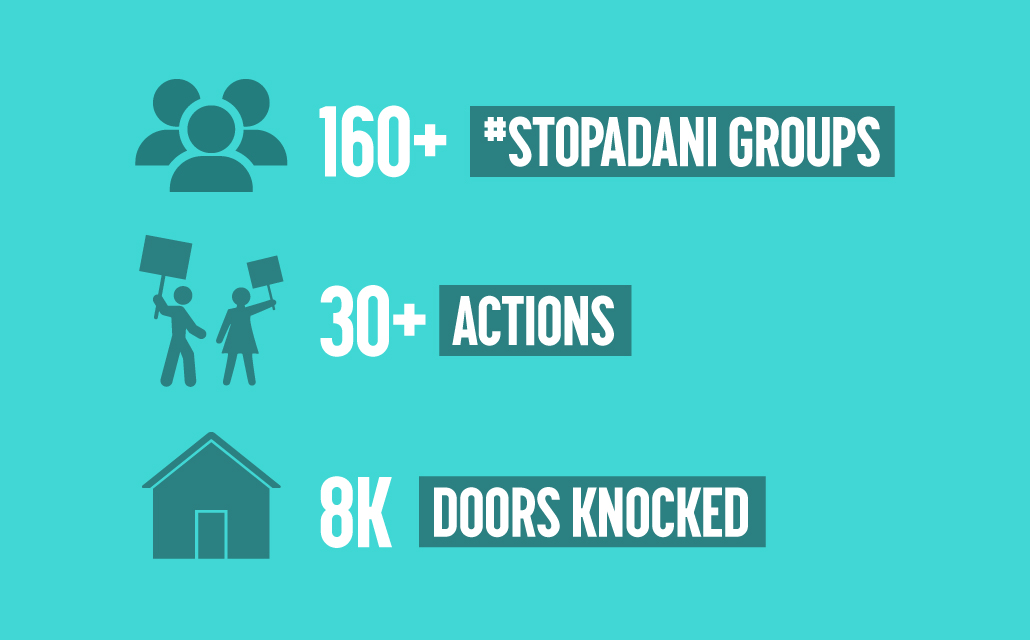 350.org Australia, an independent entity and close 350.org partner, continued to make progress against the Adani coal mega-mine in Australia.

Thanks to the efforts of the #StopAdani campaign, the company behind the project is unable to find outside financing for construction, has been prosecuted for contaminating the Great Barrier Reef, and was forced to dramatically decrease the scale of the proposed coal mine. In 2018, 350.org Australia worked closely with more than 160 #StopAdani groups around the country. Together they mobilized in Melbourne and Sydney, and knocked on 8,000 doors to spread the word.

Bill McKibben also visited Australia to help the #StopAdani effort and held over 30 events and 5 public meetings attended by over 2,000 people. 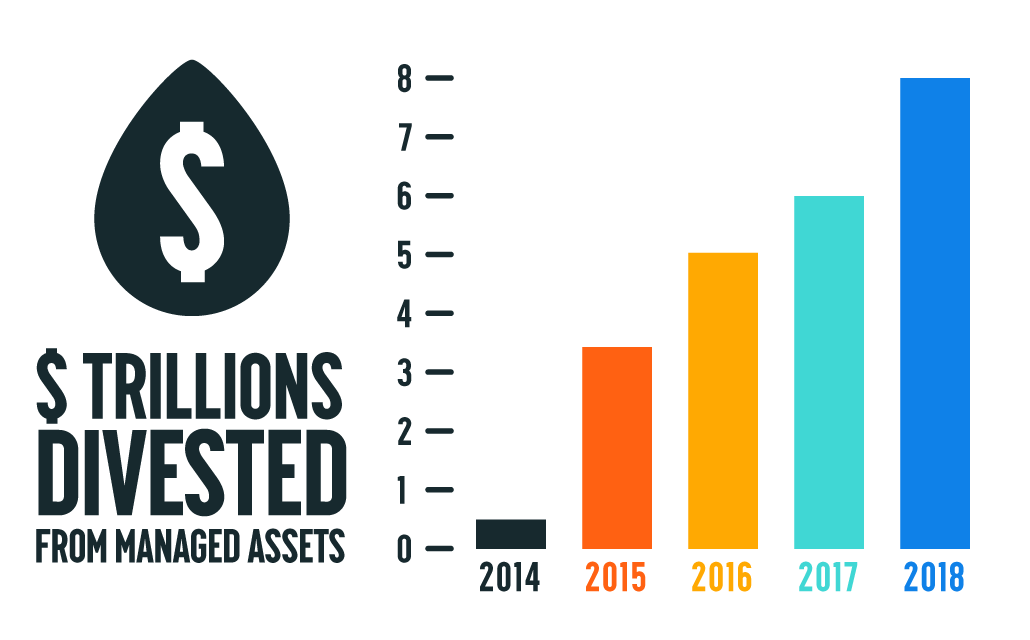 2018 began with a big announcement from New York City – that it was divesting its $189-billion pension fund from fossil fuels, and taking five of the most climate-wrecking fossil fuel companies in the world to court.

We’ve had hundreds of notable divestment commitments last year, including more than 40 faith institutions, the Republic of Ireland, and France’s Caisse des depots et consignations. This brings the amount committed to divestment to $8 trillion in managed assets from over 1,000 institutions. In Eastern Europe and the Caucasus, our team determined that climate literacy is low and the political power of Gazprom is significant enough that a solutions-oriented approach would reach more people quickly. So we launched a sustainable cities campaign called Cities for Life.

Just after launching last year, the mayors of four cities in Ukraine (Lviv, Kamyanets-Podilsky, Zhytomyr and Chortkiv) and one in Georgia (Kutaisi, the second largest city in Georgia) signed public agreements with 350.org to transition to 100% renewable energy by 2050.

In May, we held a Climate Action Day where supporters held events from city picnics with renewable energy elements, climate management workshops, to bicycle races with more than 1,000 people joining the events. Since launching the ‘Let’s Divest’ campaign in November 2017 in Japan, we mobilized more than 9,000 people to sign petitions calling on banks to stop investing in coal, fossil fuels and nuclear. As a result, 14 organizations and more than 180 individuals divested their bank accounts and instead chose “Cool Banks” that do not fund fossil fuels or nuclear energy.

This sent a clear message resulting in the biggest 3 banks in Japan adopting credit policies for the coal sector for the first time, and commitments to continually revise their social and environmental policies in line with international standards. Two major banks adopted policies to stop funding new coal power plant projects in late 2018 – a first for commercial banks in Japan. Our Pacific Fossil Free campaign – Pacific Pawa – has been working closely with the Pacific Climate Warriors to position and popularize the definition of real climate leadership as the just and fast transition to a world without fossil fuels, powered by 100% community-led renewable energy.

To call for urgency to combat the climate crisis, our team organized over 20 events in 15 Pacific countries. Pacific Pawa garnered over 5,000 signatures calling for 100% renewable energy and over 450,000 impressions on social media. We worked with Pacific Island influencers to ensure our message was heard both online and in traditional media, leading to our videos gathering over 70,000 views. The campaign has been a source of inspiration to many, amplifying frontline Pacific voices, and is clearly drawing connections between the impacts of climate change for the world to act on. 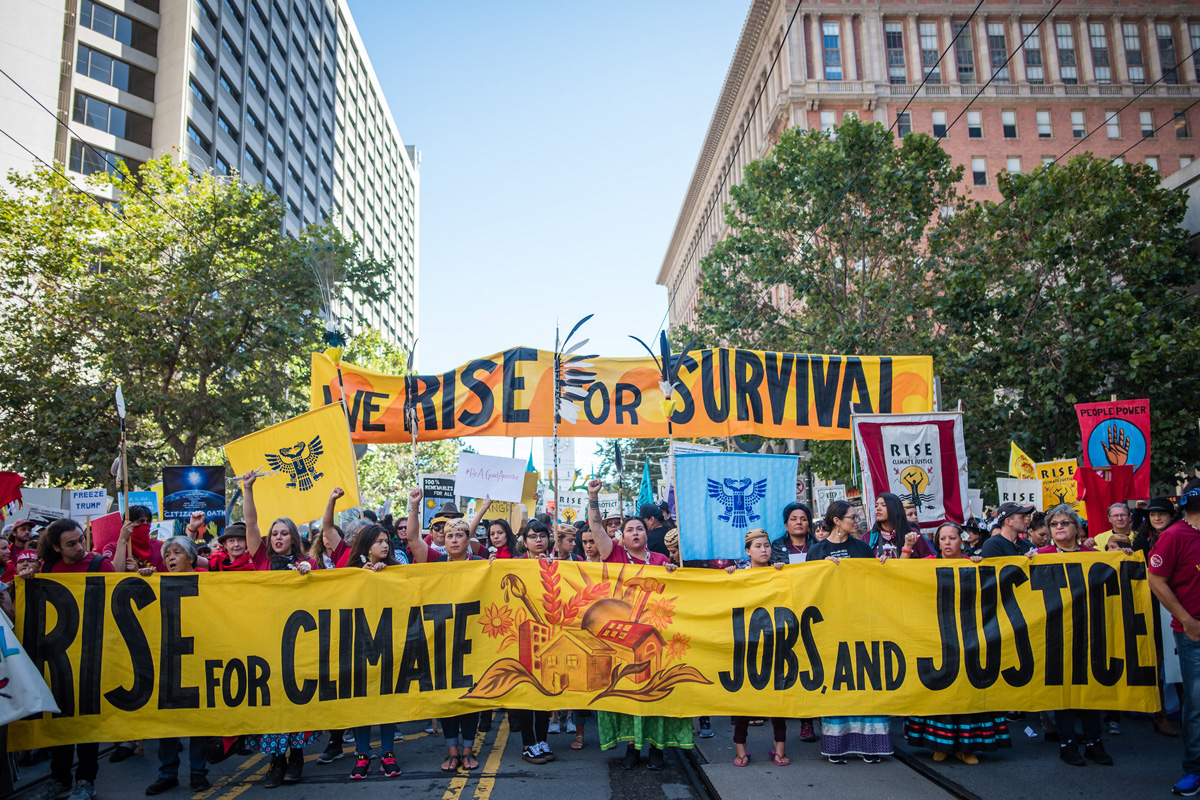 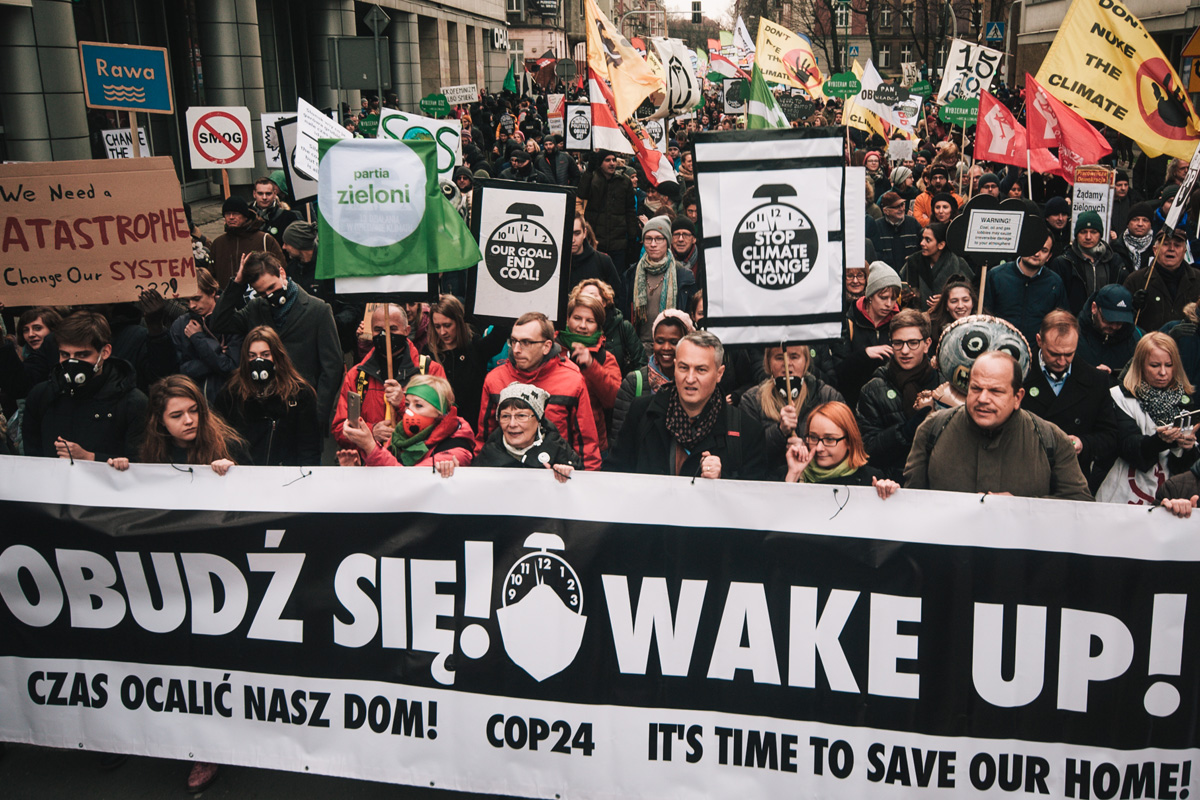 On September 8th, 250,000 people on all seven continents joined our Rise for Climate mobilization. We worked with over 700 partners to make this a moment that leaders in the Global Climate Action Summit wouldn’t be able to ignore. In the week following the marches, the mayors of New York City and London challenged every city in the world to divest from fossil fuels. New York City went a step further and agreed to invest $4 billion in renewable energy. Under pressure from 350.org and partners, California Governor Jerry Brown signed a bill committing to 100% renewable electricity and issued an executive order saying the state would go carbon neutral by 2045.

Prompted by our activism, Sen. Jeff Merkley (D-OR) introduced the RISE Act, which would provide a fossil free retirement option for all federal employees and instruct the Government Accountability Office to study the risks of fossil fuel investments in pensions and to provide a divestment mechanism if those risks are shown to be substantial.

The People’s Dossier & The IPCC Report The release of the UN’s Intergovernmental Panel on Climate Change (IPCC) 1.5°C report was an important moment for the climate movement. To connect the dots between temperature increase, climate impacts and the need to stop fossil fuel infrastructure we developed the People’s Dossier on 1.5°C.

We encouraged and organized hundreds of Dossier deliveries to local politicians, to show them that we have the solutions to avoid further warming. The first two weeks after the release of the report, we mobilized thousands of people to attend over 300 actions on six continents.

350.org and the dossier deliveries were mentioned in 200+ articles with a reach of 90 million people, and secured broadcast air time on European networks. Due to our efforts, the Canadian Parliament held an emergency debate in the House of Commons, and we helped amplify the Stop Adani campaign to Australian Parliament Members. The UN’s COP24 meeting was held in Katowice, Poland, and was an opportunity for our team to strengthen and engage the climate movement in Eastern Europe. We partnered with allies like Greenpeace to sponsor the Climate Hub outside the COP24 venue, which was a central space to hold panels, discussions, workshops, and events about the need for more climate action from COP negotiators.

Following Greta Thunberg’s call to organize school strikes on the last day of the COP, 350.org and partners helped bring students into the COP itself to underscore that countries need to increase their climate pledges. Due to efforts from us and partners, Ukraine increased its pledge to reduce emissions.

Our message was spread far and wide. Our work was mentioned in 3,300+ articles in online media and newswires with a combined potential audience reach of 2.5 billion. We also worked to support partner and grassroots voices by sending unbranded press releases, redirecting journalists, and promoting their events.

350.org cannot do its crucial work without partners and volunteers.