This led to a centering of BIPOC and frontline stories throughout the Climate Strikes such as the impacts on health in fossil fuel refinery communities to communities impacted and displaced by hurricanes.

350 Local Affiliate Groups in the US $250k granted for innovation and action

The 350 local group affiliate network is a crucial part of our work in the United States. These groups are growing the grassroots climate justice movement and winning key local and state victories across the country.

We convened 10 local affiliates for the ‘Upping Our Game’ retreat that created our national organizing plan for the historic September Climate Strikes and to connect local fights against fossil fuels.

We also supported our local group network with several new capacity-building programs including our Heart & Muscle Grassroots Leadership Cohort and the PowerUp: Fundamentals for Local Groups virtual training and coaching program that shared organizing skills with 67 people from 30 local groups. These programs are crucial to replicating and empowering the grassroots movement.

We also started a new program to help local groups center equity and racial justice in their organizing. The Racial Justice and Equity Community of Practice grew from 8 to 12 local groups and we started the national BIPOC caucus to provide an ongoing space for Black, Indigenous and People of Color leaders to connect, strategize and support each other’s work.

100% Renewable Energy in Eastern Europe and the Caucasus In Eastern Europe and the Caucasus, our Cities for Life campaign had resounding success securing commitments for transitions to 100% renewable energy (RE). Focusing on a solutions-oriented approach, our campaign built on the successes of five major cities committing to 100% RE last year.

In May, Ukraine’s Ministry of Ecology and Natural Resources signed an open memorandum of cooperation with 350.org to work together and raise public awareness about the climate crisis.

At the first Cities Climate Ambitions forum we helped organize in Ukraine, 160 cities that are part of the Association of Small Towns of Ukraine pledged to transition toward 100% RE. In addition, the city of Poltava, a long-time gas dependent city, declared its intention to transition to 100% RE — a major victory with our partners in the region.

Our team also prioritized grassroots training in the region in 2019 to help supercharge our efforts: For the past five years, our team has held an annual leadership camp to engage and skill up young activists in the East Asia region.This year our team worked with 29 youth activists representing 10 countries to educate and train them in techniques to combat the role of financial institutions in fossil fuel development. During the camp, our team organized skill sharing and team building exercises, and in-depth strategy discussions that can be implemented in our work to stop the financing of fossil fuel projects.

At the end of the camp, the participants founded the 350 Asia Finance Group, a learning platform for finance and divestment for those who want to continue and focus on this work further.

Matagi Mālohi in the Pacific 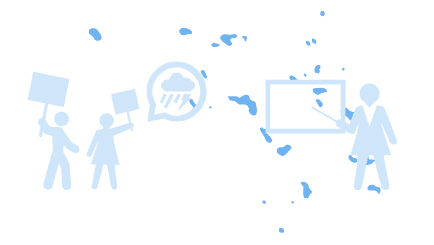 The Matagi Mālohi is a powerful storytelling project that centers Pacific identities and cultural strength. This story was centered in many new trainings for the region such as a digital storytelling workshop in the Republic of the Marshall Islands, Vanuatu’s first Youth Climate Advocacy training and the first Training for Trainers for our Pacific Diaspora team.

During the 5th Pacific Islands Development Forum Leaders’ Summit, a ‘climate crisis’ was declared in a special session and a call to ban fossil fuels, echoing the global movement declaring ‘climate emergency.’ The Summit had representation from which are most at risk to climate breakdown such Fiji, the Solomon Islands, and Timor Leste – in addition to regional institutions and NGOs.

Expanding the Climate Movement Across Asia We deepened our engagement with youth activists in Indonesia to create a stronger movement. We held two intensive training sessions for 60 organizers across 12 cities and linked them up with existing local groups. Thanks to these new skilled-up organizers, we mobilized 8,000 people in 24 cities to take to the streets during the Climate Strikes. The mobilization on climate at this scale was unprecedented in Indonesia.

In the Philippines, there were three major events in Manila on September 20th and at least 20 more across the country during the climate strikes, with the biggest mobilizing 600 people.

Across the continent, we supported youth strike organizers in India and Nepal. We held a number of climate organizing training for 5,800 students and 180 teachers so they can mobilize their communities. We also teamed up with partners to release a new report on Bangladesh’s coal sector, Choked by Coal: The Carbon Catastrophe in Bangladesh. The report exposes foreign-led finance as the driving force behind plans for 29 coal-fired power stations. If built, these plants would increase the country’s existing coal capacity 63-fold, from 525MW today to 33,200MW.

During the UN’s Asia-Pacific Climate week, 350.org convened 30 young campaigners from 10 countries across Asia for a jam-packed 3-day climate leadership training in Bataan, the Philippines. The team also amplified the message to delegates that bold action means ending the age of fossil fuels when we addressed them directly during the meeting. The trainings team at 350.org has developed new resources for the movement in 2019.

Our Director of Global Training, Daniel Hunter, authored the Climate Resistance Handbook with a forward by Greta Thunberg. We gave away over 20,000 free copies (e-book and print) in dozens of countries and thousands have been ordered directly to help activists young and old.

Lastly, we added a dozen new training tools to the website, including brand new tools like Parata: a climate justice exploration, to ensure the movement is well-trained. Optimizing how movements use technology and staff it for success is a passion of ours. We’re filling a gap in how these tools reach a truly global audience, including volunteer organizers in the Global South, where these kinds of support systems are less readily available but where the fossil fuel industry is on an expansion push. We believe movement-savvy tech can be a breakthrough to increasing who’s involved and how successful we are in local campaigns.

We built the most flexible mobilisation setup we’ve ever had with tools including GlobalClimateStrike.net, access to organising and mailing tools for our local groups and partners, and open source design assets.

We know that these tools contributed to making the strikes the biggest climate mobilisation in history — at least 250,000 of those were new to the movement and joined the strikes through our site.

Our work rebuilding our tech infrastructure has created ripples across the non-profit sector. Our team has caught the attention of MobLab, Chronicle of Philanthropy, Action Network, and Whole Whale after the publication of an article on why 350 dismantled its digital department and built a Product Team.

Our grassroots campaigns fighting climate crisis around the world.

350.org cannot do its crucial work without partners and volunteers.