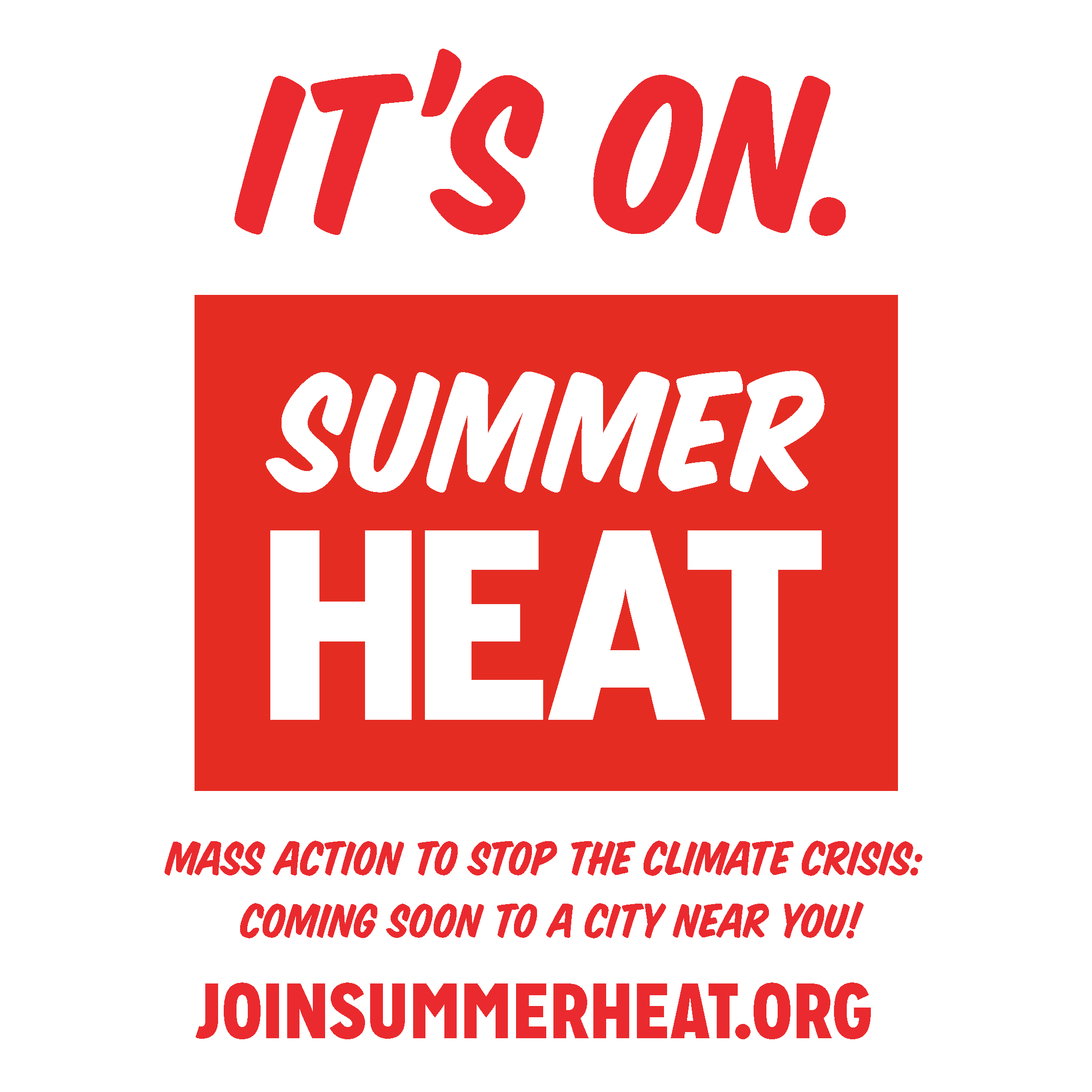 For the last two years, all across the country, people have said the same thing to us: “We’re ready to fight.”

And as the planet lurches past 400 parts per million concentrations of CO2, the moment has come, the moment to ask you to do hard, important, powerful things. The last two weeks of July are, statistically, the hottest stretch of the year. This year we want to make them politically hot too. Which means we need you, out on the front line. We need some of you to risk going to jail, and all of you to show up and speak out. And since it’s a hard thing to ask, this letter is going to be a little longer than usual. (If you want to cut to the chase, though, the list of actions can be found here.)

We’re calling this next phase of the fight “Summer Heat.” Over the course of the final weeks of July, from the Pacific Northwest to the coast of Maine, from the Keystone pipeline route to the White House where the administration has broken its promise to put solar on the roof, to the Utah desert where they’re getting ready for the first tar sands mine in the US, we’re going to try and get across the essential message: it’s time to stand up – peacefully but firmly — to the industry that is wrecking our future. Click here to make your stand: joinsummerheat.org/map

We believe that mass action can breathe life into even the most hardened political fights, and so these actions will all aim to bring together thousands of people to stand together — perhaps sometimes on the wrong side of the law.

For people on the front lines of fossil fuel extraction, these fights are often, properly, about the local immediate impacts. And now all of us us, even those fortunate enough to live without that daily trauma, need to add the weight of our anger and hope as well. It’s one big fight. Front-line communities need and deserve reinforcements, pouring in to help the people who have been carrying these struggles as they begin to impact us all.

It won’t be just July, of course. In June friends are organizing “Fearless Summer” protests at mining and drilling sites around the country. In Canada, First Nations connected to the Idle No More movement are hatching plans for a “Sovereignty Summer” which could see“coordinated nonviolent direct actions” on Indigenous lands that are in the midst of fierce anti-extraction battles. meanwhile, our colleagues at CREDO continue to collect names pledged to civil disobedience should Keystone XL move forward. But Summer Heat will be a powerful focus — a chance for thousands of us to show the courage we need to lower the temperature.

We’ve got to go on offense elsewhere, and in the last few months young people have been showing us how. The rapid spread of the divestment movement across college campuses should provide courage to everyone: we got goose bumps when the students at Rhode Island School of Design, occupying their president’s office last week to demand divestment, lowered a banner out the window: “We May Be Art Students, But We Can Still do the Math.”

Look – this movement isn’t made up of professional protesters. For the most part, it’s students, teachers, retired people, civil servants, farmers, businesswomen, fisher folk, artists, mailmen, ministers. It’s people whose homes were demolished by Hurricane Sandy, or who just had an oil pipeline burst in their backyard.

Just the other day Exxon CEO Rex Tillerson went on TV and declared: “My philosophy is to make money.” And he lives that philosophy by compromising the future of the earth. And so those of us who have a more complicated philosophy need to stand up. We can’t outspend him, but we have other currencies to work in: passion, creativity, spirit. And sometimes we have to spend our bodies.

Here’s how it works. This is a list of the actions planned so far. A few more may be added in the weeks ahead as we keep working with allies. Find the one nearest you. Start making plans to show up. Be there when the time comes.

We’ll have people there to train for the actions — in every case there will be options for people who don’t want to risk arrest, but if you’re ready to take it to the next level, there will be lawyers and such on hand to help. This will be peaceful, dignified, but firm. We’re serious.

Our hope is that this summer will be a historic show of solidarity not just with the Americans who suffer most from the fossil fuel industry, but with the people across the planet whose lives are at risk as the world warms — and indeed with the planet itself, beleaguered but still so worth fighting for.

If you weren’t needed, we wouldn’t ask. But in a fight this big, we are all needed, now more than ever.