Fossil Free News is a global email newsletter published every two weeks. Sign up for more updates like this.

Keeping it in the ground: We’re celebrating some major wins against the fossil fuel industry from around the world over the past week. In Canada’s tar sands region, the largest ever proposed open-pit mine has been shelved, thanks to people power. The company, Teck Resources, said itself that uncertainty over climate policy and protest in Canada convinced them to pull out. Historic resistance has come from Indigenous Climate Action, 350 Canada and many other groups: they’re pushing for the fallout to make space for a Green New Deal.

In the Philippines, a new ban on all new coal-fired power station projects in the province of Antique has passed after years of anti-coal protests in the region. The provincial board said the ban was because of the damaging effects of coal to communities’ health. 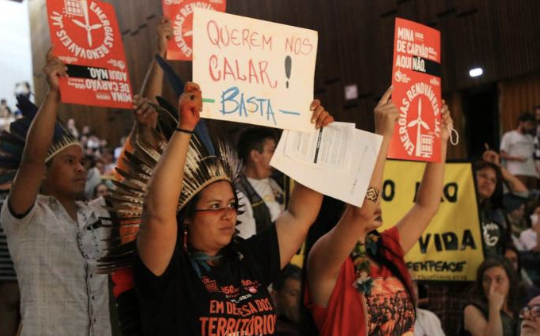 Indigenous activists at a public hearing about the mega-mine in the state legislature. Photo: 350 Brasil

What would’ve been Latin America’s largest open-pit coal mine was stopped by a federal court Friday, thanks to a diverse campaign of marches, public education and advocacy. The court said the coal company’s failure to consult the local Indigenous population was a key factor. Now family farmers, Indigenous communities, and fishers as well as the 4.5 million people of the nearby state capital, Porto Alegre, are safe from its threats. A whopping 4.5 gigatons of CO₂ will be avoided over the mine’s lifetime.

People power is working, and it’s all thanks to you! These are big, important wins that keep fossil fuels where they belong – in the ground. Read on for more inspiring stories from around the globe. 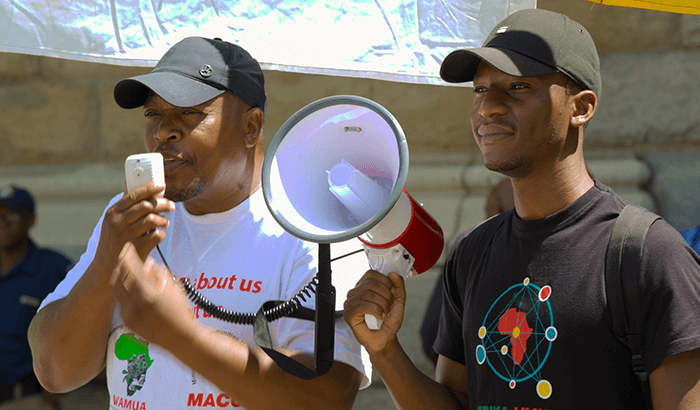 “You cannot finance what is killing us. It doesn’t make sense.” Meshack Mbangula from Mining Affected Communities in Action speaks in Pretoria. Photo: 350 Africa

Dear Minister: Activists demanded that South Africa’s Finance Minister Tito Mboweni cut off public financing to fossil fuels on Monday, ahead of his major budget speech. They singled out the national development bank and another public finance institution, the IDC, for fuelling the climate crisis by supporting fossil fuel projects instead of renewable solutions. More

Chasing the money: On Tuesday, the world’s largest fossil fuel lender announced a new climate policy that falls way short. For more, try this Rolling Stone article from Bill McKibben on why JP Morgan Chase has become a major campaign target in the United States. 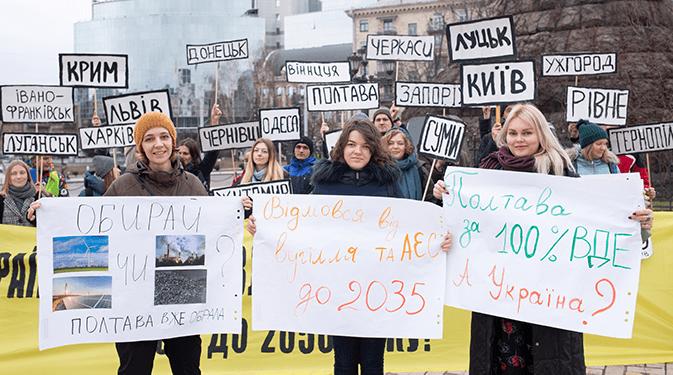 Kiev: Members of the Energy Transition Coalition hold the names of Ukranian cities that have already made commitments to renewable energy. Photo: Valentyna Novikova

100% renewables: Thousands of people across Ukraine are telling the government its plan for the energy transition doesn’t go far enough. On Friday outside the Ministry for Energy and Mining, a coalition of youth demanded a national plan for 100% renewable energy by 2050, and an end to new coal mines which harm communities on the frontlines of extraction.

Clean seas: The Austrian oil company OMV has pulled the plug and stopped its controversial deep-sea drill off the coast of Aotearoa New Zealand, after failing to find oil. Days later, Equinor (formerly Statoil) announced they wouldn’t drill in the pristine waters of the Great Australian Bight, sparking more celebrations from activists who’ve been fighting for its protection. 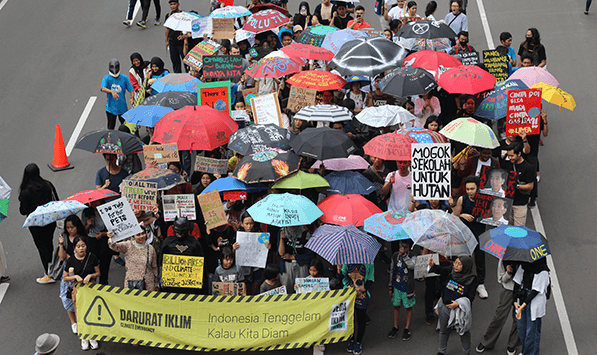 People embraced the rain with colorful umbrellas with slogans in English and Bahasa Indonesia for the march. Photo: Andrew Daniel

Strike! Youth took to the streets on Sunday in Jakarta, Indonesia to demand the government declare a climate crisis. Since then, devastating floods have started leaving many stranded.

All over the world, youth and adults are gearing up for a major month of escalating climate strikes and actions starting in April. Make sure to connect with people near you to find out how you can join or support the effort. Connect

“We are the case study, the guinea pig.”

Back in early January, air quality in Australia’s capital reached 26 times the hazardous levels for humans – a level so high, its longer term effects are still unknown. Hear firsthand what it was like, and the medical implications, in this interactive piece from The Guardian.

Are you part of a faith institution? Here’s your chance to divest: Religious and spiritual institutions around the world are invited to join a multi-faith global divestment announcement from March 26 to 28, 2020. If yours is ready to make a commitment to end investments in fossil fuels, get in touch with Operation Noah by March 19.

That’s it for now – if you liked this news, make sure to sign up for more. In the meantime, keep sharing these stories to celebrate the big wins!