Announcing… “The Time to Act Is Now — a Buddhist Declaration on Climate Change” just launched by our new friends at the Buddhist Climate Project.  This is a truly profound statement (and website, if you ask me).  And it’s most especially exciting to see the Dalai Lama’s official endorsement of the 350 target! 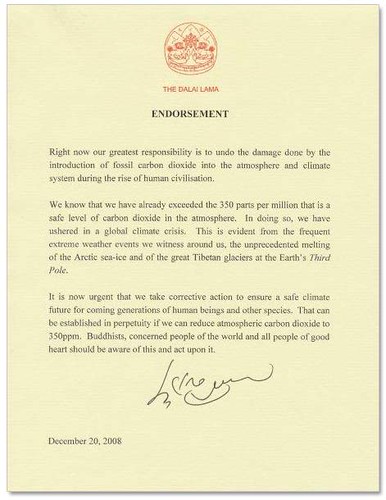 Here is what the www.ecobuddhism.org website says in the introduction to the declaration:

“In the run-up to the crucial U.N. Climate Treaty Conference in Copenhagen in December 2009, the Declaration that follows will present to the world’s media a unique spiritual view of climate change and our urgent responsibility to address the solutions. It emerged from the contributions of over 20 Buddhist teachers of all traditions to the book A Buddhist Response to the Climate Emergency. The Time to Act is Now was composed as a pan-Buddhist statement by Zen teacher Dr David Tetsuun Loy and senior Theravadin teacher Ven. Bhikkhu Bodhi with scientific input from Dr John Stanley.

The Dalai Lama was the first to sign this Declaration. We invite all concerned members of the international Buddhist community to study the document and add their voice.”

Click here to read the full declaration, (which includes specific mention of the 350 target), and share it with any Buddhists you know!

There is much to report this week about communities of faith joining in the movement for 350 (sneak peak). If you’re not Buddhist, stand by for more interfaith action, but for now, enjoy this news from the Buddhist world.

UPDATE: The Buddhist Declaration — “The Time to Act Is Now” — has generated 800 signatures in it’s first five days online, including 25 Buddhist teachers from all traditions and many countries!