Fossil Free News is a global climate newsletter published every two weeks. Sign up here to get it straight to your inbox.

Wednesday marked the 50th anniversary of Earth Day, kicking off a global online protest that will roll into online climate strikes on Friday.

Climate strikers had originally planned street marches and disruptive actions across the world this week, aiming at the fossil fuel industry and its funders. Now they’ve changed course to help slow the spread of coronavirus and save lives.

But the shake-up can’t deter us: in fact, it’s got to make our calls even louder for a Just Recovery that tackles inequality and the climate crisis together. Creative online actions and an outpouring of art and song are generating new shows of solidarity between students, Indigenous people, workers, and families hit by COVID-19.

Tomorrow under the slogan #FightEveryCrisis, the online Global Climate Strike will show that even if we cannot leave our homes, we are united. Browse globalclimatestrike.net for actions to take and new trainings and resources to build your organizing skills. 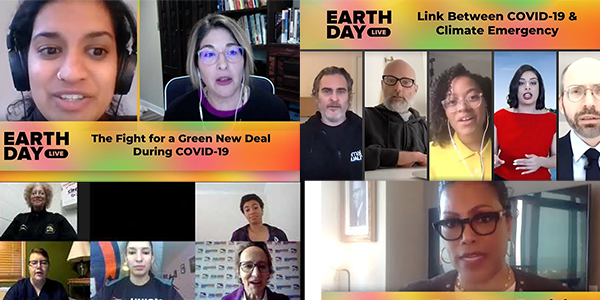 Hundreds of activists, celebrities, and scientists joined together in the United States with youth strikers for Earth Day Live, a 3-day interactive livestream running now through Friday – tune in here.

Today is “Divest” day, hosted by the Stop the Money Pipeline coalition that’s organizing to end the financing of climate destruction. Activities include a remote Town Hall with elected officials on People’s Bailouts, and a digital takeover of Chase Bank branches. People will comment on Chase’s Facebook profiles about how the bank is the world’s biggest fossil fuel funder, and why those customers will move their money elsewhere. 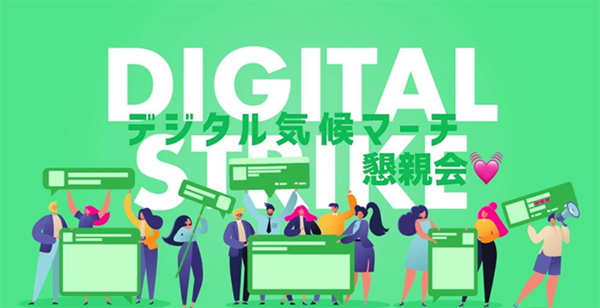 Meanwhile in Nepal, activists shifted their Earth Day plans from a strike outside the mining department to a social media storm to challenge plans to drill for oil. And in the Philippines, youth strikers are holding an online webinar series on digital activism to keep bringing people into the movement. Read more.

With lockdown extended until the end of May in Uganda, youth striker Vanessa Nakate had even started a podcast and video series in the lead-up to Earth Day. Read her story and hear from more youth strikers around the world on how they’ve adapted their organizing to this moment.

Worker solidarity: There’s no doubting the economic devastation from coronavirus. The ILO calls it “the worst global crisis since World War II”, with four out of every five workers worldwide affected by hour and wage cuts. For those in the informal sector and in societies without public safety nets, the results are catastrophic. As Workers’ Day approaches on May 1, governments must do all they can to get economic relief straight to those hit hardest: especially to communities of color who are often most affected by climate impacts and pollution.

International Workers’ Memorial Day on April 28 will honor workers killed, disabled, or injured by their work. We’ll be in solidarity with workers everywhere affected by this crisis: caretakers on the frontlines, transport and supermarket workers, and fossil fuel workers who’ve lost their jobs, too. Read more form the IUTC on how to show solidarity. 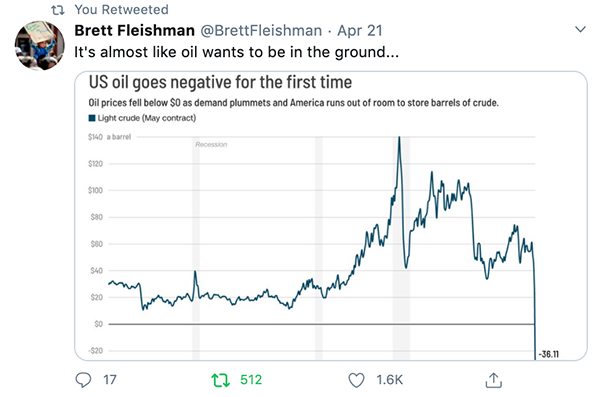 Oil tumbles: U.S. crude oil futures crashed down below 0 to -$38/barrel on Monday evening – the lowest price ever. Prices have since jumped up, but there’s no hiding that the fossil fuel industry is hurting in the pandemic. “It’s another powerful example of how fossil fuels are too volatile to be the basis of a resilient economy,” says Brett Fleishman from 350.org.

Fossil fuels are already heavily subsidized, and now the industry wants even more bailouts. A new study shows putting major investment in renewables instead could quadruple green jobs and displace the majority of fossil fuel emissions by 2050. 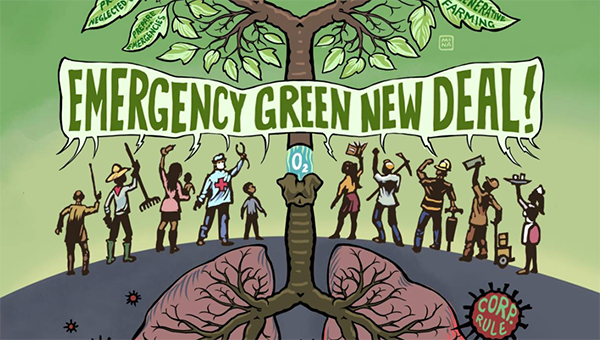 Art by Mona Caron for the Just Recovery Arts Kit (original image has been cropped).

Green Deals: 17 EU nations now support a coronavirus recovery plan based on a European Green Deal. And in South Korea, the incumbent party that campaigned on a Green New Deal won a majority to go ahead. The UN Secretary general advocated for green stimulus over polluter bailouts, and now proposals are emerging for a Global Green New Deal that would grant debt relief to developing countries, freeing up resources so they can support their own workers. It’d also coordinate large-scale investment from North to South in green jobs and technology, reducing inequality.

Divestment wins: Even in these tough times, local groups are stopping their campaign targets from putting money into the fossil fuel industry. University of Guelph in Canada passed a motion for full divestment, and American University just dumped the last of their fossil fuel stocks. Well done! 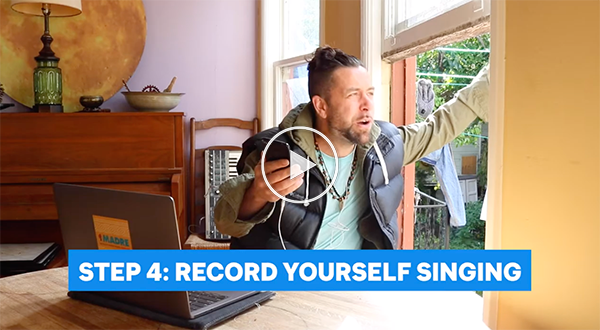 We can’t gather in the streets today: but we can still stand up for each other and seize this opportunity for a more just society. It’s up to each of us to use our voice – and right now, Peace Poets are giving us a chance to do just that, by participating in a global music video. Follow these step-by-step instructions to take part.

Selected Just Recovery Art from the kit. Artists from left to right: Woo Qiyun, Jhon Cortes, and Nicky Minus.

Many of you have signed on to the 5 Principles for a Just Recovery, and now it’s time to bring them to life. We’re asking people everywhere to share their stories of what a Just Recovery means to them. What do the 5 principles look like in your community, and what do you dream of seeing?

You can share on social media with the hashtag #JustRecovery. Use the new Arts Kit to find inspiration – and it’s the perfect time to create and share your own art with us and the world, too. Here’s more info on how.

We can’t wait to see what you come up with – until then, take care, and we’ll be back soon with more global news.