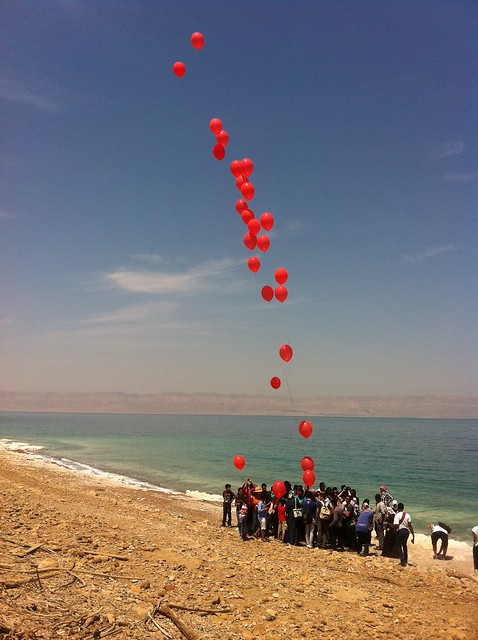 One hundred youth from the Jordan Valley, Amman, and Salt, gathered at the
shores of the Dead Sea today, organized by Friends of the Earth Middle
East. The youth held balloons to symbolize the dramatic 26 meter drop in
the Dead Sea water levels since the 1960s. The balloons were red, warning
of the immediate need for action, and extended to different heights up to
26 meters, demonstrating the continuously declining water levels throughout
the years.

Dead Sea levels have been steadily dropping since the 1960s at the rate of
one meter per year due to poor water management in the region. This impact
is compounded by climate change and unpredictable weather patterns.
Droughts and heat waves are becoming more intense in a region that is
extremely water poor. Population growth further stresses water resources
such as the Jordan River, which feeds the Dead Sea.

We are gathering on this day of action to commemorate the Dead Sea, a
unique natural wonder that is the lowest point on earth. The alarmingly
rapid collapse of the unmatched Dead Sea ecosystem embodies the struggles
the region faces with climate impacts. We need immediate action—in Jordan
and the entire region—to ensure water availability and accessibility for
the future.