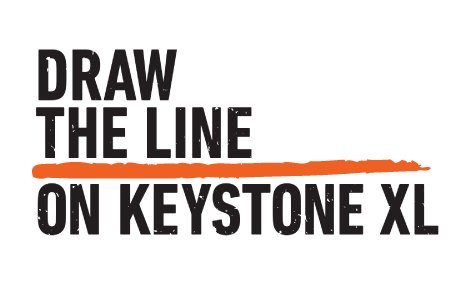 Here at 350.org, we believe, above all, in people power — and there is no better example of that than our work against Keystone XL and the tar sands.

From the summer of 2011, when 1,253 people were arrested in civil disobedience at the White House to stop the pipeline, to earlier this year when we were part of the largest climate rally in US history, to the ongoing pressure of Keystone demonstrations at Obama Administration events — taking action together has turned what was once a done deal into a defining test for the President’s climate legacy.

In the past few weeks, President Obama has said that he’s willing to stop the pipeline if he thinks it ‘significantly contribute[s]’ to climate change — and so it’s time for us to take action together once more. Today’s announcement that he is putting solar on the White House makes his choice even clearer: it makes no sense for him to put solar in his back yard and a tar sands pipeline in ours.

On September 21st, I’d like to invite you to join 350.org and allies across the country to put people power to work again. That’s when we’ll be taking action against Keystone and the tar sands in communities coast-to-coast, and telling President Obama that there is no turning back — to keep his climate promises, he must reject Keystone XL.

We’re calling it Draw the Line, to show that our commitment to defending our communities and stopping the tar sands is non-negotiable.

Some of us will draw a line showing where sea levels threaten to rise, others of us may link arms in front of refineries or tar sands industry targets to stop business as usual, still others may march with giant pipelines through the streets — but together we will draw lines that send an unmistakable message that the tar sands are a climate disaster and President Obama must stop the pipeline.

If you think you’re ready to lead a Draw the Line action in your community, click here to register your action and get started: act.350.org/event/draw_the_line/create/

At 350, we love days of action. We’ve used them before to make waves in international climate talks to help bring heads of state to the negotiating table for climate action, and highlight the impacts of climate change that are already underway.

With two years of historic momentum at our backs, I think this will be a chance to bring together our movement in a powerful way.

We’ll be having a video chat next Wednesday at 9 PM Eastern Time to talk about Draw the Line on the 21st, and the moment we’re in. I’ll be on it, along with several friends from the movement to be announced — click here and you’ll be automatically signed up to get a reminder: act.350.org/sign/dtl-9-21-video-chat-reminder/

Being a part of Draw the Line on September 21st is easy. Once you’ve found a place where you’d like to draw the line and register your event, there are resources to help you at every step of the way.

If you’re feeling ready to get started, sooner is better than later. Click here to register an action and get the guide for planning your event: act.350.org/event/draw_the_line/create/

It hasn’t been all smooth sailing for the past two years by any means. President Obama backed the southern leg of the pipeline, which is under construction, and we’re still far behind where we need to be for climate action overall.

But where we’ve made progress, we’ve done so because we stood together, and on September 21st, I hope we can stand together again. Let’s draw the line.

P.S. The news about the President putting solar on the White House is encouraging. This was a campaign we fought hard for — starting way back in 2010 — and it shows once more what we can do when we don’t give up. Here’s a link to a slideshow of photos from the campaign, and a statement from 350.org co-founder Bill McKibben: 350.org/en/about/blogs/president-obama-putting-solar-white-house-roof