I wrote this for a post on It's Getting Hot in Here (IGHIH) a youth climate blog that is just celebrating its 5 year anniversary. But the post is really the story of all of us — your organizing, your hard work, and your inspiration — so I wanted to get it up here on 350.org. Thanks again for the hard work in 2009 and let's go big in 2010!

I've really enjoyed reading this "Climate Generation" series going on IGHIH right now and was pleased when Julianna and Morgan (read his great piece just below this post) asked me to write up some quick reflections on the youth climate movement and the year ahead. It's still early in 2010 and after 2 years of head-down, full out sprint campaigning, I'm still getting all my thoughts in order. But here's one lesson I've pulled out of the last 5 years of organizing and activism that's accompanied IGHIH in its growth as a blog and community: go big. In this post, I want to tell a bit of my own story of moving from student activist to national campaigning to international organizing and hopefully provide a bit of inspiration for all of us who are making plans for the year ahead. I got my start in climate organizing as a student up at Middlebury College in Vermont. I'd done some organizing on campus (mostly around fair trade issues) but got pulled into the climate issue while taking a class with Prof. Jon Isham – a long time ally of student organizing. That class transformed into a full on campus movement: by week three of the class, we were having weekly student meetings with nearly 100 participants (the local beer we put in the center of the circle might have helped).

But it wasn't until we went after a big goal that our campus group really took off. After doing some smaller organizing efforts, we decided that, what the heck, let's push for Middlebury to go carbon neutral in 10 years. I remember the giddy feeling of setting that goal, the back and forth about whether we could really pull it off. Yet, by setting an ambitious target, all of a sudden our organizing took on new importance. Suddenly, students were interested in getting more involved, coming to us saying stuff like, "Wow, you all are really going for it, huh?" It turned out that ambition actually made things easier, not more difficult. By the time I graduated in 2007, Middlebury had committed to going carbon neutral in less than 10 years and currently is well on its way down that path (the fight for that success is another story!).

Yet by that point, some of my close friends and I had already set our sites on an even bigger goal. In the Summer of 2006, we had helped writer Bill McKibben organize a 5-day walk across Vermont that culminated in a few thousand people marching into Burlington, VT (remember, Vermont is a small place and a few thousand people gathering in the same place for anything feels a bit like the revolution). As Bill put it at the time, the march helped us realize that the only thing missing from the climate movement was "the movement." We had plenty of research and scientists on our side, but we didn't have people in the streets. So, in the winter of 2007 we launched a campaign called "Step It Up 2007" with the goal of sparking some more climate activism. Here's a fun video that tells that story:

Again, the success of Step It Up was in large part thanks to its ridiculously ambitious vision. We didn't want to just organize actions in Vermont, or just on the East and West coasts, we launched the campaign with the goal of organizing climate rallies in all 50 states of the US. There were lots of factors that made Step It Up take off, but I think it was that big vision that acted as a center of gravity. As one event organize told us later, "It was almost as if I took pity on you guys. The goal was clearly so big that I felt I had to help out or there was no way we could make it happen." Students — many of them writers for this blog — flocked to the campaign and made it their own (thanks!). And when the Step It Up day of action took place on April 14, there were over 1,400 events in all 50 states, from skiers descending the melting glaciers of Montana to divers holding banners at Florida's coral reef. John Edwards, who was running for president at the time, turned out to an event in New Orleans and endorsed our call to action, the then radical demand of "Cutting Carbon 80% by 2050."

Just 10 or 12 weeks before that moment, our core team was sitting in the college cafeteria in Middlebury thinking up names for the campaign and now the future president of the US had just endorsed our demand. 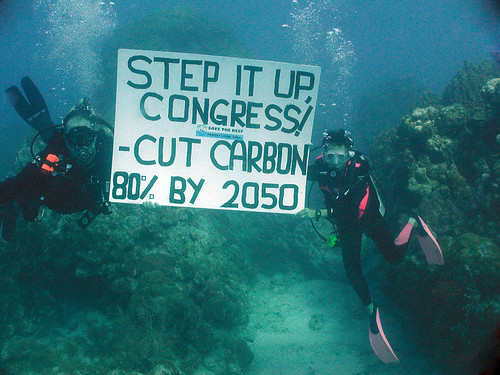 Step It Up was big, but as we quickly saw, it wasn't big enough. Despite growing momentum in the climate movement — much if it thanks to all the youth organizers who also make this blog a success, I'm thinking in particular of incredible initiatives like Power Shift and the Power Vote campaign — despite all that, we were still far away from getting the kind of transformational change we need. So, in 2008, we began to think even bigger. What if we could take the same Step It Up model of distributed actions united around a common message and make it global? About the time our core team was discussing this concept, Dr. James Hansen of NASA came out with a landmark paper (although largely unnoticed at the time) that said in straightforward scientific speech that 350 parts per million was the safe upper limit of carbon dioxide in the atmosphere. At the time, we were at 387 ppm, so the paper was putting forward a radical idea: we've gone too far, climate change is already happening, and we need immediate action. Problem was, at the time of Hansen's paper, the entire debate centered around limiting warming to 450 ppm or 550 ppm. 350 wasn't even on the table.

Our team seized on that 350 number as a key piece of data, a clear, three digit goal that, if popularized, could radically shift the climate debate. And again, we started to think really big. We decided to go global. I clearly remember an early conference call where our core team of seven friends (the same from back in the Middlebury days) divided up the continents. It was like a game of Risk. I took "East Asia" which ran from Korea down to Indonesia with a small country called China in between. Phil decided to work on Africa. We realized the ridiculousness in all this from the start, the hubris, but when you've got seven people and a global day of action to plan, there aren't too many other ways to go about it.

Again, by putting the idea of a global day of climate action out into the public, the campaign suddenly began to take off. That's not to say there wasn't a lot of grueling, grinding, and let's face it, really boring, work to be done. For two-years, I spent almost my entire life behind a lap-top, emailing and skype calling anyone I could find that might work with us, become an ally, and take ownership of the campaign in their country or region. But, the vision paid off, the ambition caught on. And on October 24, the 350 International Day of Climate Action turned out to be the most widespread day of political action in history with over 5,200 events taking place in over 180 countries.

It still gives me goose bumps every time I look through our Flickr page or the slide show of action photos on our website. This wasn't just the US, it wasn't just Europe, it was everywhere. There are photos from Cambodia and Rwanda, countries that just years ago were devastated by genocide. Photos from Iran, Iraq, Afghanistan, Yemen, places the US media consistently portray as merely hot beds for terrorists. There were hundreds — yes, 100s — of events in China and India, places that didn't cause this problem but are showing real leadership in solving it. [youtube=http://www.youtube.com/watch?v=noPcVKf24rk] Rounding the corner into Times Square on October 24, hearing Jay Z's Empire State of Mind blasting, and seeing photos from around the world playing on the big screens is a moment I'll never forget. Just a few years ago, I'd been getting together over some beers with friends in Vermont. Now, we were part of a global movement.

So, as 2010 gets off to a rocky start, as we ponder the failures of Copenhagen, the challenges before us in the Senate, the well-funded opposition that continues to spread misinformation and lies, let's not forget that sometimes ambition makes things easier, sometimes it's ok to dream, sometimes it's good to think big. Now, don't get me wrong, it's not just enough to set a goal and there's a heck of a lot more to organizing then just dreaming about the revolution. But 2010 just got going and since many of us are still making resolutions and plans for the next year, I wanted to make the plug for going all out. Let's effectively take over this year's California governor's race and make the state a champion of clean energy; let's elect real climate champions into the Senate; let's do sit-ins at every coal plant in the country; let's get a real international climate deal; let's build a movement that the world's never seen — let's really go for it.

Finally, my story here has been about trying to build a big movement, but don't forget about going big in an individual sense too. Perhaps my favorite photos from October 24 is from one of our smallest events. It's a picture of a young woman in Iraq, who wanted to take part in the international day of action. When she invited her friends to join her in a public event, they told her she was crazy, that it was too dangerous. Yet, she didn't back down. And on the morning of October 24, she picked up a home made banner, went through the multiple American military check points that separated her from the historic gate of Babylon where she wanted to take a photo, got a brave friend to snap a picture, and emailed it in to our website.  That's a big action that took big bravery, and for me, it's a big inspiration for the year ahead.

It’s Getting Hot in Here: Climate Generation is a month-long series reflecting on the state of the youth climate movement. As we pivot into 2010, the series will provide a forum for discussion on the history of the youth climate movement, recent victories and setbacks, potential for growth in capacity and influence, and how to orient the movement in the post-Copenhagen landscape. Please join youth leaders for posts on Monday, Tuesday and Thursday afternoons and early evenings. 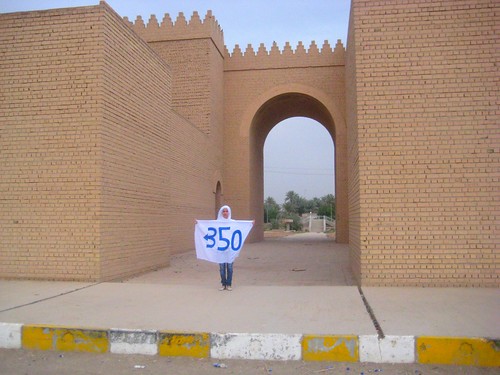