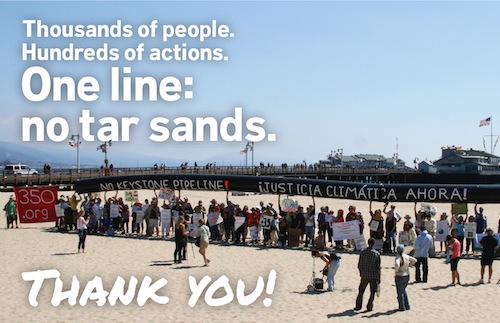 Have photos you’d like to submit? Email them as an attachment to [email protected], with your location in the subject line and a description of the photo in the body of the email.

After years of organizing, years of building strength in the movement and building resistance to the Keystone Pipeline- today was really something to see. Thousands of people in hundreds of cities drawing one line to protect our future. But today was also more than fighting the pipeline — it was also about showing the strength and power, and how people can overcome the corruption of the fossil fuel industry.

Two years ago, when 1253 people ricked arrest in front of the White House taking a stand against the Keystone XL pipeline, we showed President Obama that the movement was deeply committed to this fight. Since then, we have grown in tremendous ways: in the continued resistance along the southern leg of the Keystone XL Pipeline, the fight to keep Obama from approving the Northern leg, the organizing against pipelines in the Northeast and Midwest, the Indigenous resistance on First Nations land, communities fighting refineries burning tar sands oil, and costal communities fighting exports — we are so big, and so strong, and so creative.

Here is just a snapshot of some of the actions today:

350 Seattle had over a thousand people draw the line between the Puget Sound and the train tracks that could lead to exporting an inflated fossil fuel dependency. In Texas, folks drew the line against the southern leg of the Keystone XL Pipeline right on TransCanada’s home turf. On New Orleans, a marching band drew the line against continued threats to the Gulf Coast communities. In Nebraska, landowners built a barn ON the line of the proposed northern segment of the Keystone XL pipeline. In Detroit, the line was drawn between residents and refineries burning tar sands. Today we were in many different places, doing many different things, but we were drawing one line, in between our future and the people who would threaten it with their greed. And we will defend it.

Thank you to everyone who drew the line and continues to stay committed to the fight for our planet.