Millions of us demonstrated across the world on 20th. School strikers, unions, businesses, teachers, scientists, celebrities and religious organisations took to the streets. We united across time zones and cultures, to fight the fossil fuel industry for our future.

It’s hard to describe in words what real climate leadership looks like, so I want to show you instead: take a look at this beautiful video and let the movement speak for itself:

This is just the start – over the next week there will be mass protests and bold escalated actions. We’ll need to use our power week in, week out, to win climate justice for all. But we also need time to celebrate and share stories from Fridays historical day of action. Inspired by youth strikers, trade unions representing hundreds of millions of people around the world mobilised in support, employees left their workplaces, doctors and nurses marched and websites shutdown for the day.

From Jakarta to New York, from Karachi to Amman, from Berlin to Kampala, from Istanbul to Québec, from Guadalajara to Asunción, in big cities and small villages, millions of people joined hands and raised their voices in defence of the climate. 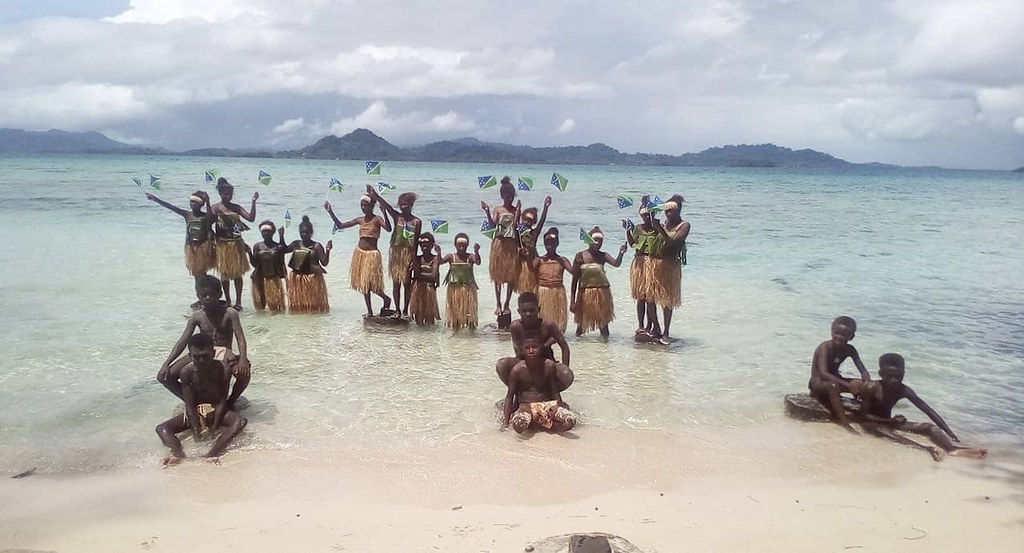 The Solomon Islands kicked off the day, with protestors rowing to shore in Marovo to perform a traditional warrior dance. The Pacific joined the global climate strike with messages of resilience and demands for better and bolder climate action on a global scale.

“We stand in solidarity with the global community of strikers by sharing our frontline truths in a way that resonates with Pacific Island people — through music, folklore, art, and storytelling.”

In the low-lying atoll nation of Tuvalu, students and parents alike took to their single airstrip runway for a march, hoisting banners of “Save Tuvalu, Save the World.” In larger island countries like Vanuatu, students, workers, government officials and activists all marched through the capital, Port Vila, with a strong message – this is a climate emergency, and the big carbon emitters worldwide have a moral responsibility to decrease emissions.

Communities on the low-lying Pacific Islands have been fighting for years for climate action and over 30 events rolled on across the Pacific to join the climate strike. People from Fiji, Tonga, Samoa, Vanuatu, Kiribati, Tuvalu, Marshall Islands, Tonga, New Caledonia, the Solomon Islands and Papua New Guinea took action.

The demonstrations spread across Australia – the world’s biggest exporter of coal and liquid natural gas – with record-breaking turnouts in Melbourne and Sydney, over 400,000 people turned up across the country for more than 100 events. In Sydney, major roads in the city centre were shut down. About 380 ship dock workers walked off the job in Hutchinson Port, according to the Maritime Workers Union.

Danielle Porepilliasana, a Sydney high school student said: “World leaders from everywhere are telling us that students need to be at school doing work. I’d like to see them at their parliaments doing their jobs for once.”

Despite alarming news that some organizer offices were raided on the eve of the strike in the Philippines, protestors carried on: 60 indigenous youth from different villages in Bukidnon, Philippines, gathering for a summit on climate action, while 500+ students, activists, and workers participated in the #ClimateStrike in Quezon City, Metro Manila, forming a human banner carrying an important message telling the world that ‘there is no planet B’.

In Japan, the youth-led climate strikes happened in 23 prefectures, with over 5,000 demonstrators amassing in the streets demanding climate action. (Read the press release in Japanese). In Indonesia, more than 3,000 people from youth communities marched for 1.5 kilometers to support the climate strike in Jakarta and 11 other cities in Indonesia, along with parents and workers who answered the children’s call to strike in #JedaUntukIklim.

In Thailand, hundreds of young people demonstrated outside the environment ministry in Bangkok and dropped to the ground feigning death.

“We are the future and we deserve better,” said 12-year-old Ralyn ‘Lilly’ Satidtanasarn, Bangkok

In India protest happened across Delhi, Mumbai, Bengaluru and Kolkata and other big cities. Thousands of Pakistanis gathered across the country a big march in Islamabad.

Cities towns villages in #India continue to participate in Global Climate Strike Week…all together in this time of #ClimateCrisis..more than 89 strikes at different locations and counting with @GretaThunberg @IndiaRebellion @ExtinctionR pic.twitter.com/u5toZbAo7t

In Nairobi the youths were demanding the president  of Kenya to commit to his promise of a 100% RE run Kenya by 2020 and put a complete halt to new fossil fuel investments in Lamu and Turkana. Strikes took place across Nigerian, including Lagos.

“Leaders should listen to what the climate scientists are saying. No leader should forfeit the future of younger generation,” Oladosu Adenike, a youth activist in Nigeria.

In Johannesburg, outside the offices of Sasol, a huge South African energy company to demand a just transition away from fossil fuels. This is going to be followed by a week of positive climate action in their communities, from beach clean-ups to urban gardening and recycled art workshops. The strikes are supported by the South African Federation of Trade Unions, which organises 800,000 workers.

The days saw over 100 actions across Africa including in Ghana demanding climate justice, Cote d’Ivoire against a proposed coal plant in San Pedro, Senegal to stop the coal power plant in Bargny from operating and the Democratic Republic of Congo calling on the president to adhere to conservation laws.

Various countries in Europe saw historic turn outs. The streets of Berlin were gridlocked with 270,000 protesters, and blockades set up on bridges later in the day. 1.4 million people in total took to the streets in Germany. Ireland saw its biggest climate protests in history. There were massive strikes in major cites across Europe including London, Warsaw, Stockholm, Paris and Edinburgh. Slovakia saw students, school children, teachers and scientists out for the Climate Strike in the Freedom Square, Bratislava.

In large and small cities across the country, people came together to take powerful action. New York City witnessed a powerful surge of 250,000 take to the streets to join the Climate Strike. In Houston, where people are still dealing with the extreme floods of Tropical Storm Imelda, people still gathered to demand climate justice. It was also the 2nd anniversary of Hurricane Maria hitting Puerto Rico, and across the island communities came together to pay tribute and also demand action from politicians. See the wrap-up here.

Climate Strike events are continuing to take place across the US over the next week — from local rallies to bold confrontations with local fossil fuel infrastructure. Check out the map again to see if there are more events happening near you.

#Houston the global warming is real, in the middle of the #ClimateStrike the rain remnants of #Imelda continued hit hardest in Houston downtown @Cesar_Espinosa #FielHouston #houstonflood #houwx pic.twitter.com/AlSK5nPeg0

Across Latin America there were powerful actions in cities like Lima, Peru and Bogota, Colombia. Throughout Brazil many joined the mobilization – many calling for the end of the age of fossil fuels.

The Climate Strikes continue, there were massive protests across France and Malaysia on the 21st. Forest fires in Indonesia are stretching into Malaysia and polluting the air – but it didn’t stop over 1,000 people taking part in their Climate Strike. Lookout for more actions during the week building up to next Friday when youth strikers across the world will take to the streets again. Next Friday will also see major mobilizations in Canada, Italy, Spain and Portugal.

BREAKING: 38,000 people took to the streets of Paris today to demand climate and social justice. Protesters then blocked 3 bridges to demand an end to climate inaction and hypocrisy.

Don’t stop here — Join the movement fighting for our future

It’s going to take all of us to end the age of fossil fuels and solve the climate crisis. Join now and get emails about actions that will make a difference.