Brazilians protest against big oil and gas auction in Rio: Around 180 activists bring citizens’ voices to the National Oil and Gas Agency: ‘No new fossil fuels!’ 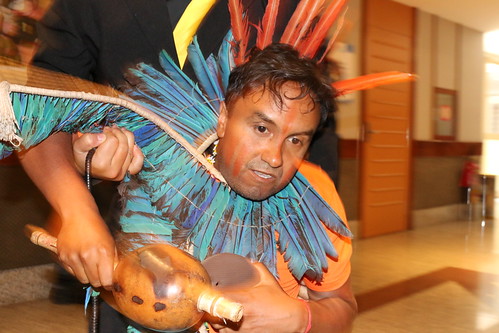 Rio de Janeiro: Brazilian citizens have spoken: no new fossil fuels in our lands. Around 180 activists, indigenous and grassroots representatives mobilized by 350.org Brazil protested in front of the five star hotel Windsor Barra, in Rio de Janeiro, where the National Oil and Gas Agency (ANP) was holding auctions for oil and gas exploration in Brazil. The 14th Bidding Round offered 287 blocks in 11 sedimentary basins onshore and offshore in many regions throughout the country. The activists held up banners that said “Fossil auctions, no!” and “The future of Brazil is renewable!” to point out that this auction blatantly disregards the global demand for a new model of economic and energy development.

Civil society was refused permission to enter the room reserved for the auction, and the protesters faced a strong reaction from organisers of the auction, who tried to forcibly remove them from the location during a peaceful protest.

“We indigenous will not let the water and the earth be contaminated by the oil or gas. We will fight to prevent them from destroying our life,” said Chief Kretã Kaingang, general coordinator of Articulation of the Indigenous Peoples of Brazil.

For Nicole Figueiredo de Oliveira, director of 350.org Brazil and Latin America, any sale of new fossil fuel development permits at this point is “simply ludicrous and immoral.” “This year alone, we have seen devastating global climate impacts at an average increase in global temperatures of around 1oC. By continuing to prioritize fossil fuels projects instead of starting the transition to an economy based on 100% renewable, fair and free energy, the Brazilian government is doing a massive disservice not just to its own citizens, but to populations around the globe. Besides that, granting the permits puts biodiversity and communities in a total area of more than 120 thousand km² at risk.”

According to Oil Change International, we have already extracted more oil, gas and coal, from  existing fields and mines, than we can afford to burn if we are to keep global warming below 2°C. The oil and gas alone are more than we can afford for keeping the climate to 1.5°C. Governments, particularly those that have signed on to the Paris Climate Agreement, should grant no new permits for fossil fuel extraction. 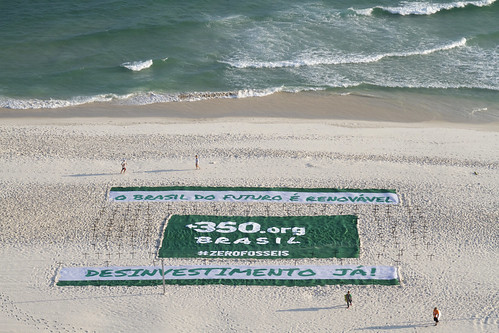 Projects linked to coal, oil and gas have become high-risk investments due to a combination of factors: climate campaigners are securing progressive carbon and health policies, the alternative energy markets are witnessing a boom, supported by multilateral climate commitments, and the increasingly severe events caused by climate change are putting the planet — and the governments worldwide — on a constant red alert.

At the same time, communities around the globe are beginning to recognise their right to prior informed consent before their lands are opened up to commercial exploration, and are beginning to organise themselves in resistance to these threats. In the U.S, for instance, actions against the Dakota Access pipeline delayed its completion and have already cost the company nearly $100 million. A further delay in the case would add millions of dollars more each month.

Combined to that, the fossil industry often uses illusory promises of progress and development, income-generation and jobs. But Rio de Janeiro, the seat of the auction and Brazil’s largest oil and gas producer, is living proof of the contrary. Currently facing one of the most serious economic and political crises in its recent history, the state has the poorest rate of economic growth in the country, and presents the perfect example of how an industry can bankrupt a city.

According to the fishermen leaders present at the auction, the promise of development for the communities that live around the projects did not happen. “We have nothing else left. The fish and shellfish are dying, the mangrove is dying. They are contaminating our rivers, children and we will fight to avoid further destruction and death. Petrobras has promised services and support to fishermen, but they are the only only one winning,” said Silvia Lafayete Pires, member of the Association of Fishermen and Residents of São Miguel, Espírito Santo.

“Brazil has tremendous potential for renewable energies that are environmentally sustainable, socially just and economically viable. The government should focus its attention on attracting investments towards improving this essential and growing sector, and not strengthening an industry that is doomed to failure in a very near future,” concluded Nicole Oliveira.

We see laws being passed and actions that compromise our well-being within an integral ecology gaining strength. We, as the Catholic Church, as our Pope Francis motivates us in his encyclical letter “Laudato Si”, assume a militant position to say ‘No’ to the destruction and environmental contamination, we say ‘No’ to the exploitation of fossil fuels. We came to Rio to give voice to the Catholic youth who want life in abundance, with our rights to have productive and fertile lands, fresh and clean water, clean and healthy air to breathe.” — Friar Bernardo Luz, Franciscan of the Diocese of Umuarama, Paraná.

Of the 36 companies approved to participate, more than 60% are foreign and at least five of them are involved in corruption cases: