Germany calls itself a climate champion, but its massive lignite mines are one of the biggest sources of CO2 in Europe. The coal company RWE is threatening to destroy whole villages, and forcing people who have lived there for generations to leave, in order to make room for new coal mines in Germany’s Rheinland region.

But last weekend, 40,000 students from Fridays for Future – the school strike movement in Germany – and Ende Gelände activists came together to protest, and demand climate justice.

In a powerful show of solidarity, activists from all over Europe came to support the local community threatened by coal mining. Thousands of people, young and old, filled the streets of the half-empty town and used their bodies as a barrier between the villages and the mine.

See it for yourself! Watch the video to get inspired by the incredible power of our movement, and share it as widely as you can. We need to act now, and to act, we need the hope this weekend of action gave us! 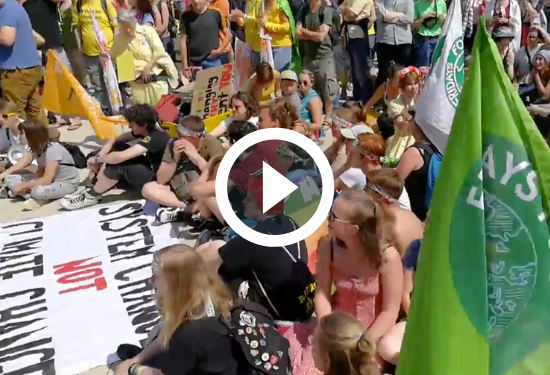 There’s still time to halt climate breakdown, and last weekend school strikers and Ende Gelände activists showed that if we work together, we can stop even dirty fossil fuel giants like RWE.

You may have heard about Ende Gelände before, and their work taking on the fossil fuel industry in Germany. But this year was different. This time, Ende Gelände activists were joined by school children who have striked for over 6 months to demand action on climate change. They were also joined by locals who are fighting to save their homes from the encroaching coal mine.

Norbert has lived in Keyenberg with his family for 54 years. German company #RWE wants to destroy his home to expand the #Garzweiler lignite mine.

Together they proved that the climate movement in Germany – and across Europe – is stronger than ever.

On Friday 21 June, 40,000 students from all over Europe joined forces with Fridays for Future and went on strike just kilometers from the huge lignite mines that continue to fuel climate destruction. The next day, they headed to the edge of the Garzweiler mine and saw the sight for themselves.

This all happened alongside the longest blockade of coal in the history of the Rheinland anti-coal movement. Activists braved scorching heat and police brutality to enter the mine and block the train supplying coal to the power plants for over 48 hours. For the first time, a group of parents with their children, and people with different kinds of disabilities, including people using wheelchairs, carried out their own successful blockade. The events this weekend showed that when we join forces, and when we can make the most of the range of strengths we bring to the movement, we can achieve things far beyond what we thought possible.

There will be many opportunities to take action in the next few months, but we need to motivate each other and find ways to inspire people to join us. For starters: share this story, and think about ways that you can get active and build a movement with others where you live – whether it’s in the Rhineland region in Germany, or in a town or city on the other side of the world.