This post was written by Jessica Glendinning, a 350.org organizer in Virginia 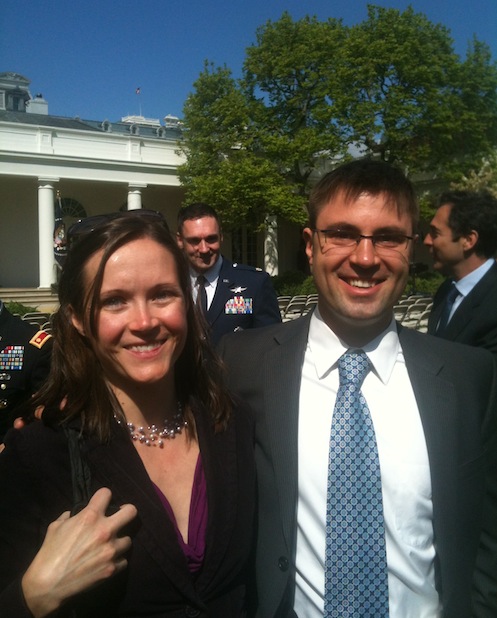 This past summer, I was arrested in front of the White House on the first day of the Tar Sands Action, which resulted in my spending three days in a District holding cell. I have been back to DC a few times since then, including a trip this past November to give the President’s house a great big hug.

Last week, I was back in Washington and at the White House again – but this time as an invited guest along with 350.org’s Jason Kowalski.

I met up with Jason a few minutes before our scheduled arrival time, and we walked up to the gates. Two ID checks, one security checkpoint and just a few minutes later, we were on White House grounds. Walking up to the Rose Garden, we were greeted by military officers in their ceremonial uniforms and a four-piece jazz combo.

Having always been on the other side of the fence, it was slightly surreal to have the experience of being inside the gates, schmoozing with members of the other environmental groups and the rest of the invited guests. We rubbed elbows with the heads of organizations, networked as much as we could, and were then led as a group to a portion of the Rose Garden right outside the Oval Office.

We ended up being seated with members of a company that represented ethanol producers on our right, and a group of women from Moms Rising on our left. There was quite a bit of chatter as we waited, and people freely moved up and down the middle aisle, taking pictures in front of the Oval Office. When the press arrived, it was a silent rush of bodies – empty one moment, and then suddenly the side aisle was full of photographers.

After a while longer, a young man came out with a glass of water for the podium, followed a few minutes later by a group of young men and women who filled in the steps behind the podium – a diverse human backdrop for the President’s remarks. A hush fell across the gathered audience, and a few moments later the President emerged from his office; the crowd greeted him with standing applause. After asking us all to be seated and apologizing for running late, he began his remarks, the steady clicking of camera shutters accompanying his words.

While my initial understanding was that the President would be making a statement to encourage Congress to end fossil fuel subsidies, I was unprepared for his focus on what I have come to think of as his “everything but the kitchen sink” energy policy (for the record, he calls it his “all of the above” energy policy, but I like my version better).

His remarks began with a strongly worded stance on subsidies and their impact on the average American family. For those few moments, my spirits were lifted – this was an historic moment, the President standing up to Dirty Oil and their lobbyists, saying that we as a country would no longer tolerate their gouging of the American people just so that oil companies and their shareholders could make record profits.

And then, just as suddenly as my hopes had been raised, they were dashed on the rocks of “all of the above”. The President touted the drilling that had been opened up under his administration; he proudly announced that domestic oil production was at a record high level; he discussed the fact that if we drained the entire reserves under the United States, that it would be but a drop in the bucket in comparison to world supply.

He did briefly mention that American oil consumption has been lower in recent years (go efficiency!) and that strides were being made to harness our greatest resource – American ingenuity. The point was also raised about investing in more efficient cars and homes and businesses, as well as renewable sources of energy. Just as my hopes were raised again – bam! More drilling, more oil, more dirty crude bubbling from under our soil, more wildlife reserves being opened to oil exploration. Everything but the kitchen sink.

While I applaud the President for his courageous actions in standing up to Dirty Oil and their cronies on Capitol Hill, I am also deeply disappointed. When the President made promises on the campaign trail that ours would be the generation that would finally free our country from the tyranny of oil, I believed him. I still believe, to some degree, but under constant trampling, belief can only hold strong for so long.

So, Mr President, if you are listening, hear my plea: keep your promises, and give us change we can believe in.

I believe in an America where future generations will have clean air to breathe and fresh water to drink, powered by clean renewable energy (and good old fashioned American ingenuity). Don’t let me down.