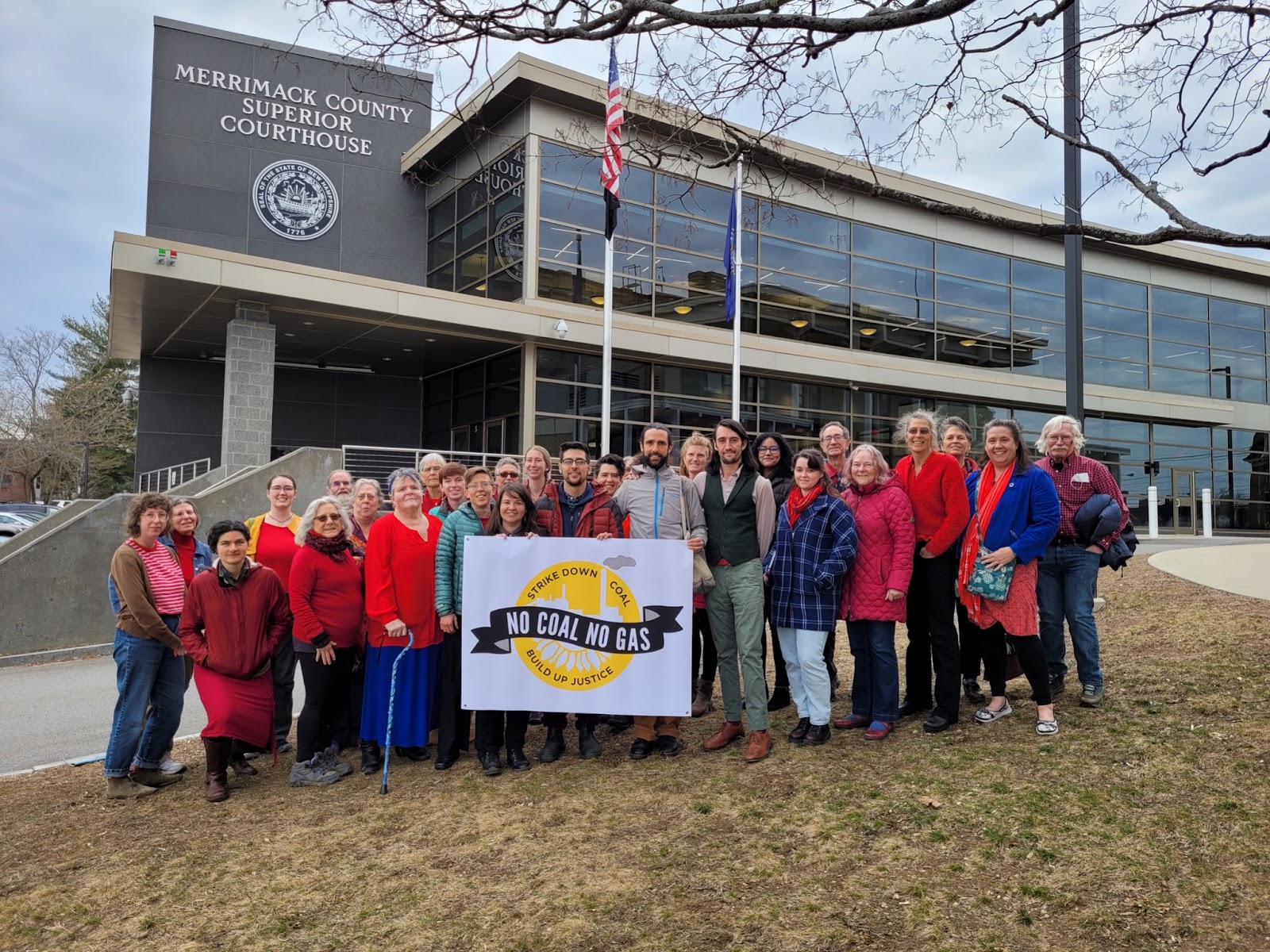 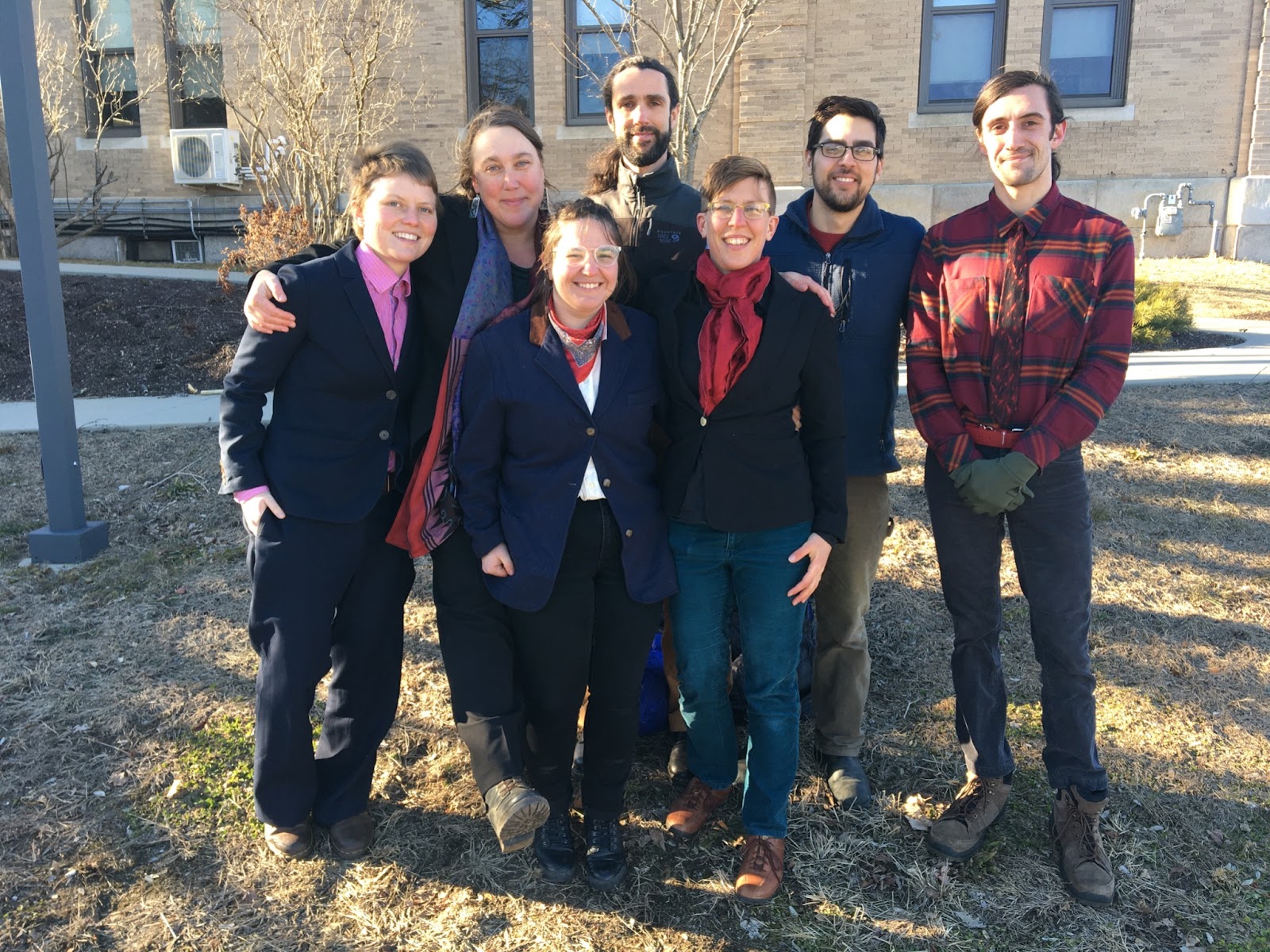 The trial began on March 22nd and the jury deliberated for four hours before the verdict was delivered on March 24th. Five defendants testified to the urgency of climate change and the efficacy of direct action and power of movement-building through community. The prosecution focused on the state’s alleged concern for the safety of the people on the tracks, calling three law enforcement officers and the Executive Director of Safety for Pan Am Railways to testify. Defense attorneys questioned whose safety the state protected on the date in question, noting that the stopped train was moved closer to the bridge while some activists and officers were still on the railroad bridge.

In closing statements, Attorney Kira Kelley said “my clients believe that catastrophic climate change is increasing at an ever accelerating rate. My clients believe that doing whatever we can to intervene responsibly with a culture of care, with an inviting and powerful action is a matter of human survival. My clients understood that coal is a particularly disastrous fossil fuel in terms of the amount of emissions it produces. Other similar campaigns have successfully shut down coal plants with bold acts of physically stopping shipments.”

Attorney Logan Perkins spoke to the jury about their duty, saying “You get to be the peers that decide what justice is.” While the jury found two of the defendants “not guilty” on some of the charges, the guilty verdicts are a reminder that business-as-usual for the fossil fuel industry is destroying our livable climate, while climate activists who seek to spark change are prosecuted for their acts of conscience.

Defendant Jonathan (Jay) O’Hara recounts, “I and others were determined to do what we could to both physically stop that coal that was coming and also build a robust movement that was capable of working for the changes at the scale and urgency that is needed to address the climate crisis.”

The No Coal No Gas campaign, launched with support from the Climate Disobedience Center and 350 New Hampshire Action, set their sights on Merrimack Station upon recognizing that coal is the worst and dirtiest fossil fuel source and this power plant is the last of its kind in New England. The campaign’s goals include building community, showing what is possible when we take collective action, and shutting down the coal-fired power plant.

“No Coal No Gas has prioritized community,” said defendant Emma Schoenberg. “It’s not just about shutting down a coal plant, it’s about creating a community that can withstand climate change and take collective action to show what is possible.”

The prosecutors objected repeatedly to defendant testimony about the emissions and enormous cost of Merrimack Station. Granite Shore Power, which owns the power plant, annually receives millions of dollars in subsidies (“forward capacity payments”) from electricity ratepayers across New England, awarded by ISO-New England, the region’s electrical grid operator. While Judge Andrew Schulman denied the use of the “necessity defense” in this case, the realities of the climate crisis and a belief in the necessity to spark meaningful change were integral to the actions of climate activists on December 8, 2019.

Dana Dwinell-Yardley recalls, “I was doing lots of things to stop the climate crisis, under the impression that if everyone does their little bit we’ll all be OK. But then I learned that the coal plant emits as much CO2 emissions in one hour as the average person does in 26 years.”

Merrimack Station pollutes the air, water, and land in and around the coal-fired power plant, harming the health of the environment, plants, wildlife, and human communities. Each defendant in this case recognized the harm caused by the coal plant and chose to act out of good conscience to stop more coal from being delivered and burned. We don’t need coal in New England: there are clean, renewable energy sources joining the grid and enough energy capacity surplus to handle the region’s highest energy needs.

The defendants also recognized how the climate crisis impacts all of our lives. Johnny Sanchez said, “While a lot of my opinions about climate change are informed by policy and research, the fundamental ways I think about climate change are from growing up in an arid area, experiencing fires fires, droughts, and food scarcity…this is an unmitigated disaster and we should be doing everything within our power to stop it.”

In this case, the law was used to protect private property over people, planet, and collective survival. We challenged the jurors and the court system to think in another way, and interpret this case as a climate justice issue. The defense attorneys and defendants emphasized the diligent care they took concerning safety, including double confirmation that the train was fully stopped before stepping onto the train bridge. They also reminded us all of their intentions to stop the worst effects of the climate crisis by ending the use of coal in New England.

“I do it because I feel like it has an impact and meaning beyond myself, which is something we strive for in addressing climate change,” said Daniel Flynn. “I think a lot about how the choices we make today are going to impact generations from now.”

For more information about the campaign to end coal in New England, visit nocoalnogas.org.

March 21, 2022:
Five activists who blockaded a coal train in 2019 will argue their case in Merrimack Superior Court March

CONCORD, NH — Five New England climate activists with the No Coal No Gas campaign will take their case to jury trial at Concord Superior court on March 21st-24th. The group was arrested while blockading a coal train set to deliver tens of thousands of tons of coal to the Merrimack Station in Bow, NH in 2019.

Activists will make the case that the harm of burning coal necessitates direct action to protect people and the planet, in an appeal of the sentence handed down by Concord district court last year. The train blockade and court proceedings are part of an ongoing campaign to end the use of coal and gas in New England.

Court will run between 9am and 4pm from March 21st – 23rd and may extend to the 24th. Merrimack Superior Court is located at 5 Court Street, Concord, NH. Media need to reach out to the court in advance if you intend to photograph or record the trial. The defendants will be available for interviews before and after the proceedings but not during trial. Additional members of the No Coal No Gas Campaign will be available to answer questions throughout the duration of the trial.

No Coal No Gas is an ongoing campaign to stop burning fossil fuels in New England.
Go to nocoalnogas.org or strikedowncoal.org for more information.