We just sent this email out to everyone who signed onto our subsidies petition. Haven’t signed on yet? Get to it: www.350.org/subsidies

When we launched our campaign to end fossil fuel subsidies last week, we didn’t quite know what to expect.

Well, we’ve got good news: in just a few days, you were joined by over 30,000 people who have signed onto our call to action — including thousands of people who have never before been a part of the growing 350.org network. We launched this campaign with a powerful rally in DC that brought together environmental groups, Congressman Keith Ellison, 350.org founder Bill McKibben, Senator Bernie Sanders, and many more.

Check out the fantastic video from the campaign launch, then share it far and wide with just a few clicks: www.350.org/subsidies-launch 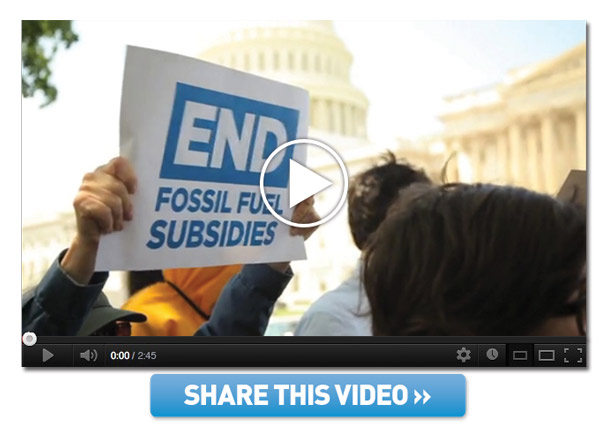 Here at 350.org headquarters, we were honestly a bit worried that a campaign on subsidies wouldn’t fire people up. After all, the very word — “subsidies” — doesn’t exactly roll off the tongue. The complexity of the U.S. tax code can be a bit dry and academic, and we were concerned eyes would glaze over as we started to focus on a specific piece of legislation.

Well, it turns out that people everywhere are ready to take on corporate polluters. We’re fed up with the fossil fuel industry’s habit of distorting our democracy and wrecking our planet, and Americans from coast to coast have decided that these guys don’t deserve our money. The latest polling indicates that 70% of Americans opposed federal subsidies for the fossil fuel industry — including majorities of Republicans, Democrats, and Independents. It’s hard to get 70% of Americans to agree on just about anything, so we’re taking that as a good sign.

We’ll be ramping up this campaign in the days and weeks ahead, but for now the most important thing you can do watch and share this video: www.350.org/subsidies-launch

Thank you for leading this fight.

Jamie Henn for the 350.org Team