Today is a historic day: as tens of thousands of people filled the streets of Paris, politicians finalized a major new global climate agreement.

The deal in Paris includes an agreement to limit global warming to below 2 degrees Celsius, with an aim of 1.5 degrees, and achieve climate ‘neutrality’ that will require phasing out fossil fuels soon after mid-century. That’s not what we hoped for, but it’s still a deal that sends a signal that it’s time to keep fossil fuels in the ground, and for investors to cut their ties with coal, oil and gas by divesting.

This deal represents important progress — but progress alone is not our goal. Our goal is a just and livable planet.

If followed to the letter, the agreement leaves far too many people exposed to the violence of rising seas, stronger storms and deeper drought. It leaves too many loopholes to avoid serious action — despite the heroic efforts from leaders of vulnerable nations and communities who fought for a deal in line with science.

But the coal, oil and gas corporations of the world should take little comfort. That 2 degree pledge would require keeping 80% of the world’s remaining fossil fuels underground, a 1.5 degree target even more — and countries are required to come back to the table every 5 years to increase their ambition in reaching those goals.

Paris isn’t the end of the story, but a conclusion of a particular chapter. Now, it’s up to us to strengthen these promises, make sure they are kept, and then accelerate the transition away from fossil fuels and towards 100% renewable energy.

As world leaders in Paris were finalizing the text of the deal, thousands of people returned to the streets of Paris to demonstrate their commitment to continue the fight: 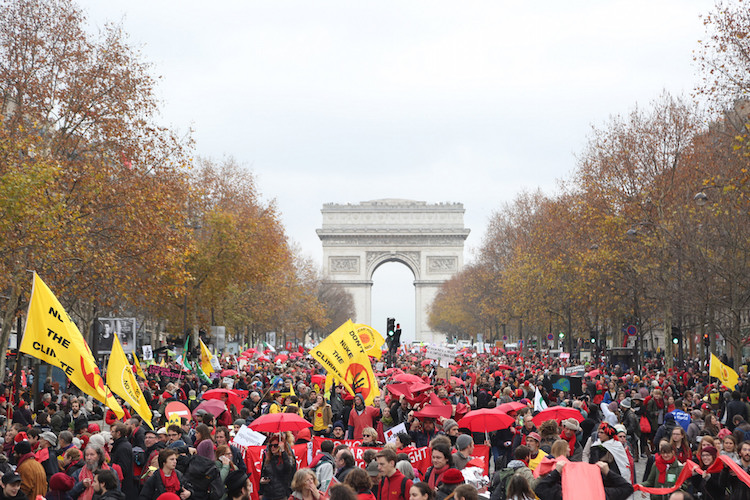 They were joined by hundreds of solidarity actions around the world, all echoing the same message: it’s up to us to keep fossil fuels in the ground.

Standing together, flowers in hand, we formed red lines in the street — because lines have to be drawn in this fight for justice, and it’s up to all of us to stand on the side of those on the front lines of this crisis.

More lines are being drawn everywhere against the true villain of the last two weeks: the fossil fuel industry, which has done everything possible to weaken even this late, late deal.

Without pressure from ordinary people, world leaders would have gladly ignored this problem entirely. It’s pressure from people that will close the gap between what was signed today and the action we need.

This begins the next chapter. Please watch this space for the announcement of something big in the coming days!

If you are reading this, you’ve been part of the work that got us all to this point, and for that, we say thank you. 2015 was a historic year for us — because we worked together to build a more powerful and hopeful climate movement.

With gratitude, and as always, hope,

May and the whole 350.org team