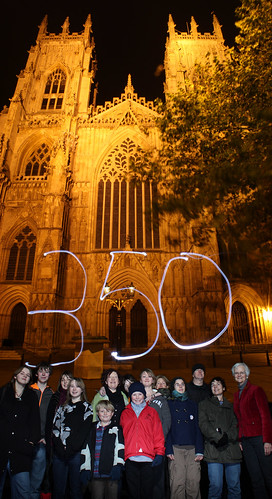 This December 11-13, tens of thousands of people of all faiths will join the “World Wants a Real Deal” weekend of action with 350.org and its partners at the World Council of Churches and the TckTckTck campaign.

"Church bells are both a way to call people to worship, and in many parts of the world a way to spread an alarm," said Bill McKibben, founder of 350.org and a frequent commentator the intersections of religion and climate change. "Today they served both functions in places around the world. Faith communities are playing an increasingly important role in the fight to save the climate–they understand the risk both to creation, and to the poorest people on the planet. And they understand the hopeful role that they can play in moving political change through their witness."

Hundreds of faith events are already planned around the world. In the Netherlands, hundreds of churches will ring their bells 350 times to signify 350 ppm of carbon dioxide, the safe upper limit according to the latest science. In Japan, citizens form the shape of a 350  with traditional Aomori lanterns at the Nishibetsuin Buddhist temple in Hokkaido.

Along with galvanizing a grassroots movement around the world, the 350 ppm target has been endorsed by a number of influential religious leaders such as Nobel Peace Prize Winner Desmond Tutu, His Holiness the Dalai Lama, and His All Holiness, Ecumenical Patriarch Bartholomew, who wrote in an open letter to over 300 million Orthodox Christians, “350 is repentance in action."

This December 13, in Copenhagen, 350.org will join Archbishop Desmond Tutu, the Archbishop of Canterbury Rowan Williams, and other faith leaders for an interfaith celebration at which they will ring the bells of Copenhagen’s Lutheran Cathedral 350 times.

“Leaders of the world – We need a real deal on climate change in Copenhagen,” said Tutu. “Millions of people, especially the very poor, are already suffering due to changing weather patterns, droughts and floods. But none of us will be immune from climate change, we are all in this together and there is no time to lose.”