In the past weeks, outrage has been building around the crisis at the US Southern border where children are being separated from their parents and put in cages. Our anger is necessary, we must turn that outrage into action — but to be effective, we have to understand how our own government’s policies have contributed to creating this crisis.

The immigration crisis at the border is the culmination decades of US-financed violence, unjust economic policies like the Central America Free Trade Agreement, and the devastating effects of climate change.

As a climate movement we believe in a safe climate and a better future which includes a just and equitable world. Because climate change is here now and people all over the world are feeling the impacts we know that our fight is a fight for justice.  This means listening to communities that are on the frontlines of the crisis, including immigrant communities, and supporting them when they are faced with violence, racism, and fascism — including from our own government. Climate driven changing weather patterns are an undeniable factor in the increasing waves of mass migration from Central America to the United States. Countries like Guatemala, Nicaragua, El Salvador and Honduras are among those most affected by climate change in the world. Worsening natural disasters and changing climate have exacerbated drought and flooding in what scientists call “the Dry Corridor.” (Map from Food and Agriculture Organization of the United Nations, purple area shows dry corridor)

The World Food Program estimates that anywhere from tens to hundreds of thousands of people have been displaced from the Dry Corridor in Central America by extreme weather that leads to increased food insecurity. The soil in this area gets so dry that it almost feels like sand — when it does rain, severe floods sweep the area, causing death, displacement and destroying the few crops that are able to grow.

People in the Dry Corridor are paying a steep price for climate change – but they are among the least responsible for the problem. Guatemala, Nicaragua, El Salvador and Honduras  produce a fraction of the carbon emissions that large industrialized nations like the U.S. do. The climate crisis is a worldwide problem; but neither the responsibility nor the consequences of this crisis are equally shared.

Countries in Central America are no strangers to migration that’s directly related to the impacts of U.S. policy. Besides our lack of accountability for climate change U.S. economic policies have played a part in forcibly displacing people from their home countries.

Economic policies such as trade agreements have not just harmed working people in the United States, U.S. trade policies have wreaked havoc in Central America. Agreements like the Central America Free Trade Agreement (CAFTA) have destroyed livelihoods and devastated communities throughout the region – crushing small farmers and displacing millions in rural communities. Many of the immigrants Trump now attacks have been left with no option but migration after experiencing some of the worst damage caused by our current trade policy.

Under CAFTA, family farmers in Honduras, El Salvador and Guatemala have been inundated with agricultural imports (mainly grains) from U.S. agribusiness. While these exports represent a small fraction of U.S. agricultural firms’ business, they represent a big threat to Central America’s small farmers, who do not have the subsidies, technology or land to compete with the influx of grain. Dumping this much subsidized grain into these economies has led small-scale farmers to economic ruin because they can’t compete and thousands have been forced to migrate to in order for their families to survive. 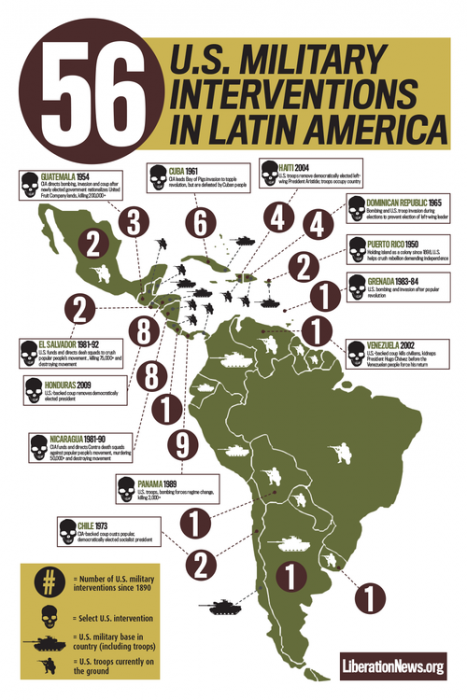 The U.S. has consistently contributed to violence and instability throughout Central America, and especially in the countries of the Dry Corridor. Guatemala, Nicaragua, Honduras and El Salvador have all been affected by a range of military interventions including coups, civil wars, military occupations and training and funding for the death squads.

A map of U.S. military interventions in countries in the Dry Corridor.These military interventions are driven by the interests of profit oriented corporations seeking cheap land, resources and labor and are supported through our government’s military policies putting profit over people. These actions have resulted in increased poverty, violence and instability in all of these countries, much of which continues today. Many of the immigrants seeking asylum at the border are also fleeing violence which has its roots in U.S. interventions during the 1980s. The U.S. bears responsibility for the wars, economic devastation and global warming that are driving immigration from Central America. Our response should therefore be in line with our responsibility for creating this crisis. This would require an end to parasitic free trade agreements like CAFTA, an end to military interventions and support for repressive right-wing governments, and corrupt corporations, as well as a fast and just transition to 100% renewable energy — so that fewer people will be displaced by climate change in the future. This is what U.S. acknowledgment of its role in destabilizing Central America should look like.

Instead, the Trump administration is separating children from their families and putting them in cages. The white supremacist history of U.S. immigration policy plays a large role in this. Many of the people seeking asylum at the border are of Indigenous descent. When natural disasters strikes these countries, like everywhere else, poor communities are hit first and worst. In the Americas, Indigenous peoples and people of African descent are overrepresented in poor communities. So are women, who make up 70 percent of those living below the poverty line in the world.  Three quarters of immigrants in the United States are women or children — so it’s mostly women and children of color who are being separated from their families, placed in detention under neglectful conditions and abusive custody, and being deported.

The U.S. is responding to the Central American migrant crisis by militarizing the border, brutalizing women and children, and doing nothing to change the policies that have displaced so many people. Asylum for immigrants — and all people displaced by US military, economic and climate policy — is not a matter of charity, it’s a question of basic justice. Those of us in the U.S. climate movement must fight for people’s freedom of movement and right to remain as urgently as we fight to protect our planet. Ultimately, we are trying to create a just and sustainable world that works for everyone, and that has to include people displaced by climate disaster and the actions of our government.

It is up to all of us to transform our outrage over the separation of families into action to free and reunite incarcerated children and their parents. But as we do so, we must remember the significant role our government has played in creating this crisis — and work towards solutions that correct some of those wrongs.