Our COP team is just back from two weeks of fighting for climate justice at the UN climate conference: COP27 in Egypt. Overall, the outcome of the negotiations were disappointing to say the least, there were enormous numbers of fossil fuel lobbyists present, and it’s clear our leaders are still failing to take the level of action needed. But there was also hope. Our movement achieved significant wins, and real progress is happening across the world.

You can get the full summary of the COP outcome along with reasons to remain hopeful in this blog by Aggy, our global campaigns director. 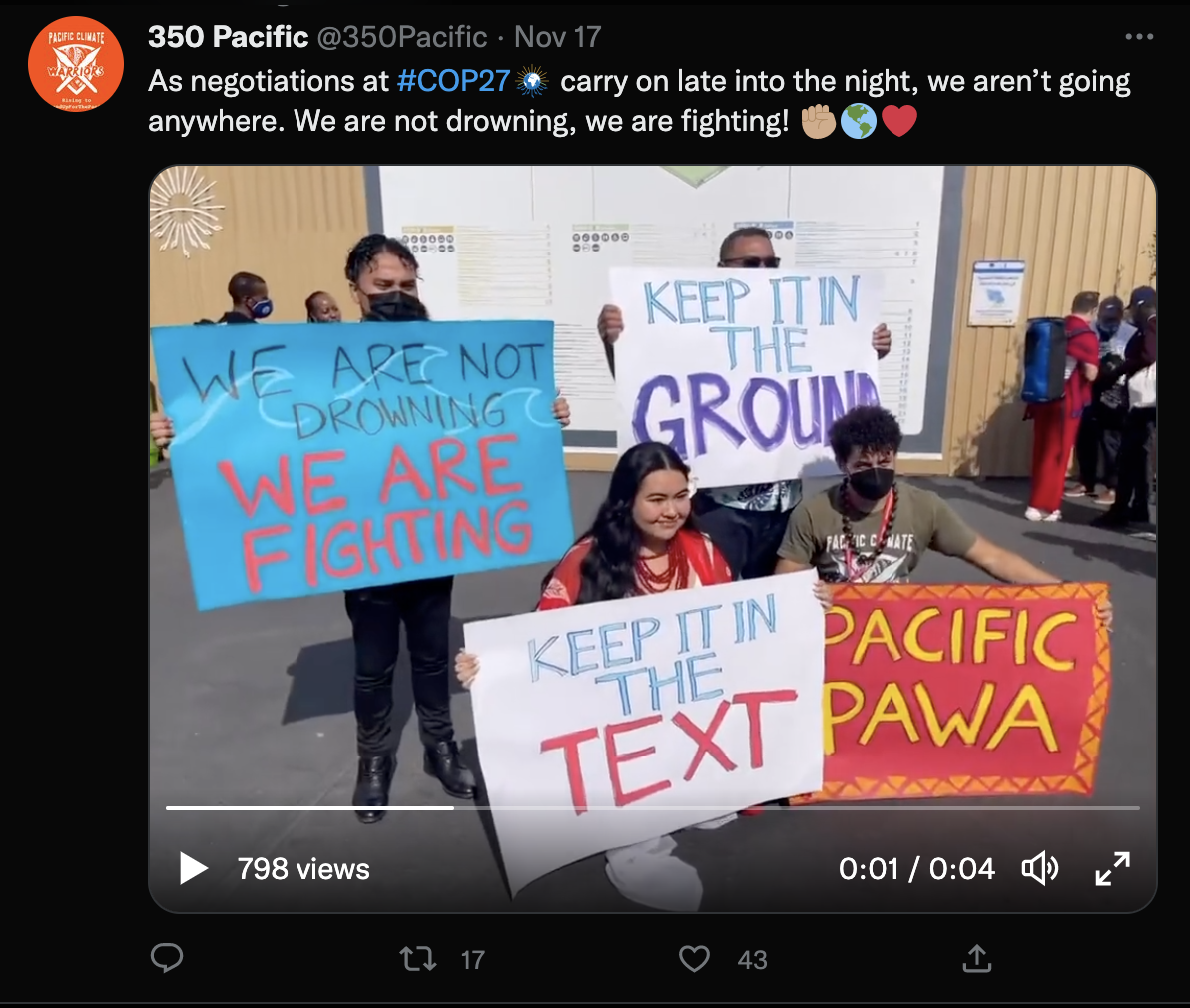 EACOP stands for the East Africa Crude Oil Pipeline. It’s an enormous pipeline that’s being built by French oil giant Total and that will go straight through the heart of Africa, endangering wildlife and displacing and devastating communities along its way. Together with partners, we’ve got big plans to stop this project in its tracks, by preventing big banks and insurers from backing it. Without money or insurance, it simply can’t be built. Already a lot of them have either backed out or said they won’t support it. To kick up the pressure several notches on the final potential funders, we ran a full week of actions to #StopEACOP.

Over 10,000 people from 149 countries took part in the week of action. Together, we sent messages of solidarity to the Ugandan students protesting the pipeline, we put public pressure on Standard Bank and mega-insurer Marsh to avoid the project, and at one point Total even left a long reply to us on social media – and then promptly deleted it. Seems like they’re feeling the heat!

In the UK, we’re sharply focused on demanding urgent action to tackle the energy crisis which is pushing millions more into fuel poverty. That’s why we joined partner organisations in launching the Warm This Winter campaign. This campaign is aimed at making sure the UK Government acts to protect those most vulnerable in society, while avoiding future crises like this one by investing in energy efficient homes and renewables. Over 200,000 of us have already signed the petition and on December the 3rd we are planning a huge Day of Action where we’ll be mobilising people across the country to demand that the UK Government keeps us #WarmThisWinter. Stay tuned for more details! 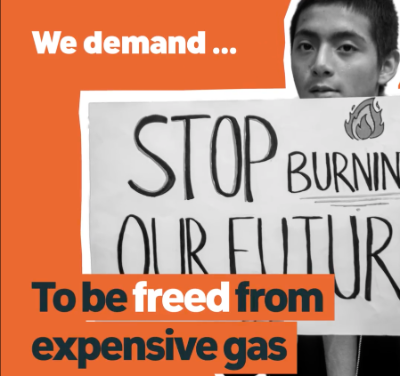 We recently launched a big, ambitious campaign with partners, aimed at making it near impossible for new fossil fuel projects to get funded. It’s called the 1-for-1 rule, and it means that for every euro invested in fossil fuels, EU companies would need to match it with another euro to cover any future losses. This forces financial giants to build their own safety net rather than our tax money to bail them out. This campaign is just getting started but we’re really excited about how it could significantly speed up the phase out of fossil fuels in Europe. If you haven’t signed our petition yet, make sure to do so here.

Another important coalition campaign we’re excited about is getting rid of the disastrous Energy Charter Treaty (ECT). It’s a treaty that protects fossil fuel investments by giving foreign investors sweeping powers to sue countries over climate action. It’s absolutely outrageous — the compensation our governments have to pay out can be in the billions! The good news is that more and more countries have started to ditch the treaty. And since 350 supporters wrote urgent messages about this to their ministers in France and Germany (along with supporters of several other organisations) – both these governments have come out against the ECT! Major momentum is building for remaining countries to leave the treaty altogether so we’ll keep you posted!

The French activists vs the oil giant

Our France team has also been working hard to mobilise public pressure against Total and the EACOP pipeline. By organising trainings, conferences and providing tools for taking action, we’ve got a strong team of volunteers who have been busy making amazing things happen. Step one was visiting the offices of the shareholders that are helping Total fund its climate-wrecking projects. You can check out the short video of their day of action here! 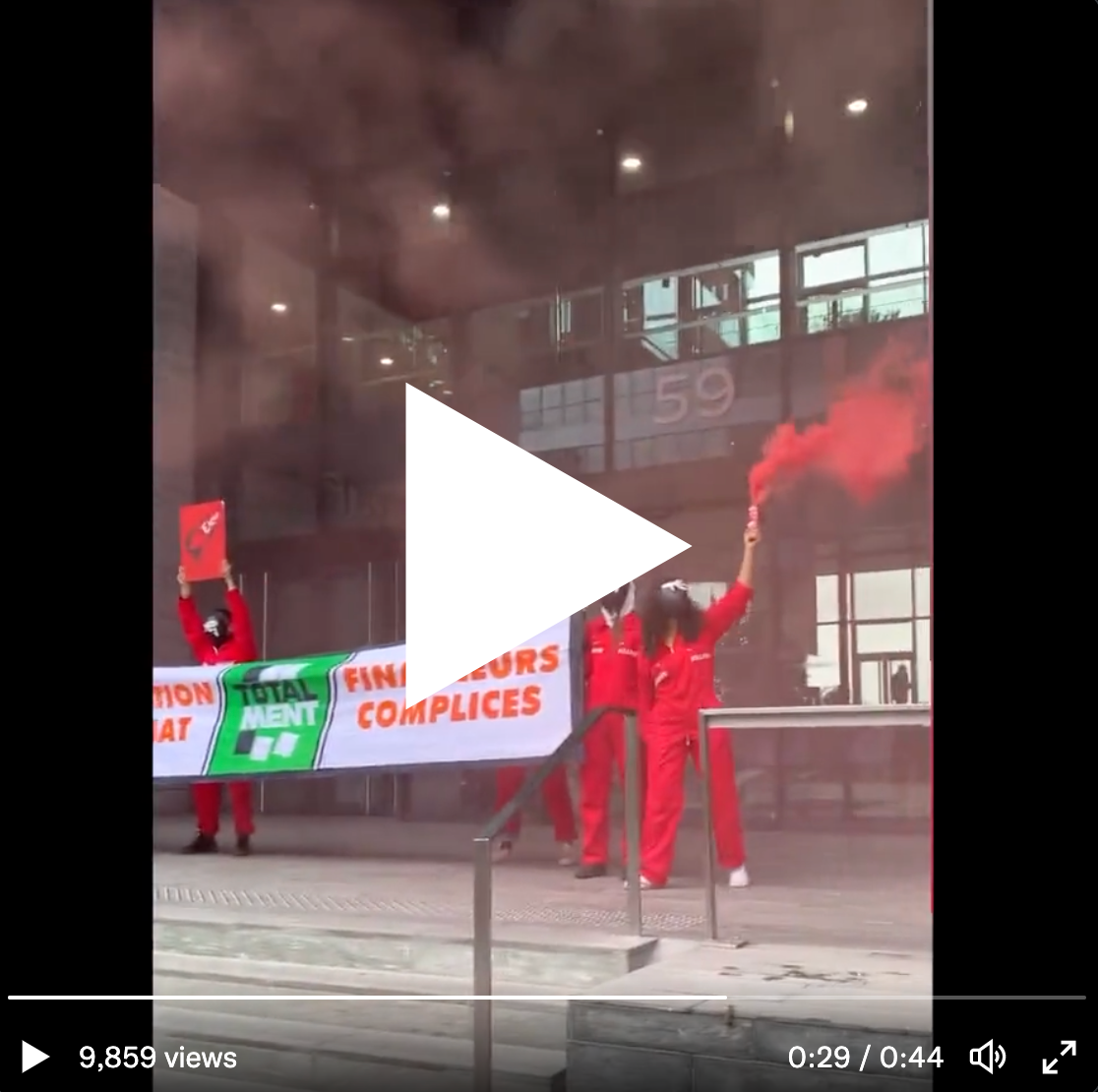 In Germany, a team of activists have been working to expose the true face of Deutsche Bank – as a fossil fuel-funder. On World Savings Day they took to the streets to project a film about Deutsche Bank’s problematic fossil fuel investments straight onto the bank’s own buildings. Petra, an activist who took part in the action, told us about her reasons for joining:

“For a long time, banks remained relatively neutral institutions in my perception. While I had already been using a green electricity provider for a long time, I only slowly became aware of how much banks, above all Deutsche Bank, were responsible for the climate crisis.“

You can read Petra’s full story here. (It’s in German, but you can use an online tool like Google Translate to quickly translate it into English if you’d like to read it.)

Exposing the polluting practices of the biggest Dutch bank

Fossielvrij NL, our sister organisation in the Netherlands, has been ramping up the pressure on their largest national bank – ING – to stop funding fossil fuels for good. They’ve been organising crowdsourced research into ING’s money flows, and interviewing frontline communities in Australia and the US that are impacted by the gas projects that ING finances – bringing their stories straight to ING’s main office. And after a tip-off from Fossielvrij NL, an investigative tv-documentary was made about the billions of euros that ING pumps into new LNG-terminals in Louisiana. 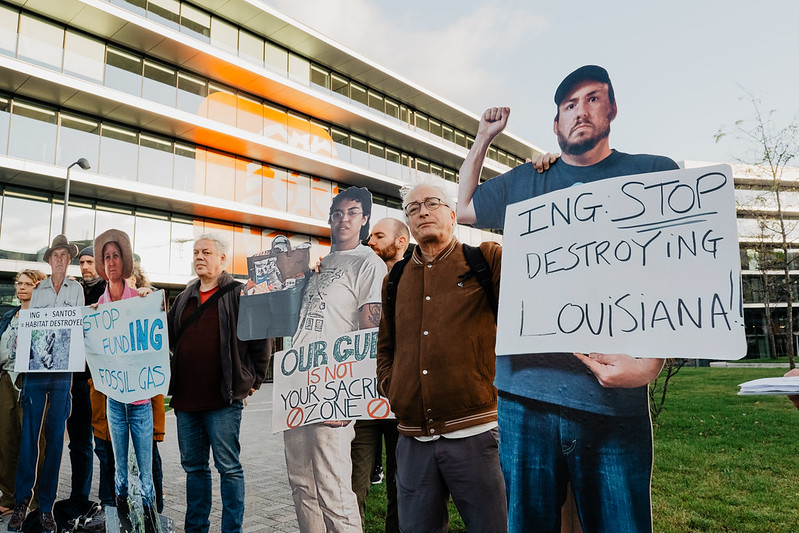 The outcome of the recent UN climate talks was not what we’d hoped for, but we know the COPs can never deliver what we need. The way to bring real, lasting change is for all of us to stand up together and demand it. And that’s why it brings me so much hope to see what we can achieve when thousands of us across Europe and the world work together for climate justice.

So let’s keep taking action – together!