We know that we need to leave fossil fuels in the ground if we’re going to tackle the climate crisis. We also know that fossil fuel companies are dead set on making as much profit as they can, for as long as they can. They’re not going to leave coal unmined, oil undrilled or gas unfracked if they have the choice.

Cutting off the finance flows to those companies is one of our best chances of seeing the change we need to see, at the speed we need to see it.

All over the world, we see powerful community-led resistance to pipelines, mines and power plants – and that is the real frontline of the fight against the fossil fuel industry.

But those frontline fights face an uphill struggle – not least because a lot of the decisions about fossil fuel projects are made a long way away from the actual sites of extraction or construction. Big decisions are being made in boardrooms in cities such as London, Frankfurt, New York and Tokyo – the world’s major financial centres.

This is about justice.

This is a question of justice. If you take a step back and look at how fossil fuel finance operates, you find that it’s not so different from the European colonialism of previous centuries. Corporations and banks, mostly in the Global North, are getting rich on the back of extraction, exploitation and environmental devastation, mostly in the Global South.

Communities in Argentina, or Mozambique, or Bangladesh bear the brunt of the impacts of these projects. They have to deal with environmental destruction, human rights abuses, and the worst effects of a changing climate – while huge profits flow back into the pockets of wealthy shareholders and executives in countries like the UK.

That’s why we need to target the UK’s financial sector: as an act of solidarity with communities on the frontlines, and because it’s where we can make the biggest difference in the struggle for climate justice globally.

So why are @bankofengland and @RishiSunak allowing @HSBC to pour money into fracking overseas? We said #NotHereNotAnywhere and we meant it.

But why focus on the Bank of England?

There have been some very effective campaigns focused on cutting off finance for specific fossil fuel projects. A big coal plant in Lamu, Kenya looks like it’s going to be cancelled because of a campaign like this for example. But the climate crisis is happening NOW and there’s no longer enough time to campaign project-by-project. We don’t even have time to campaign bank-by-bank. 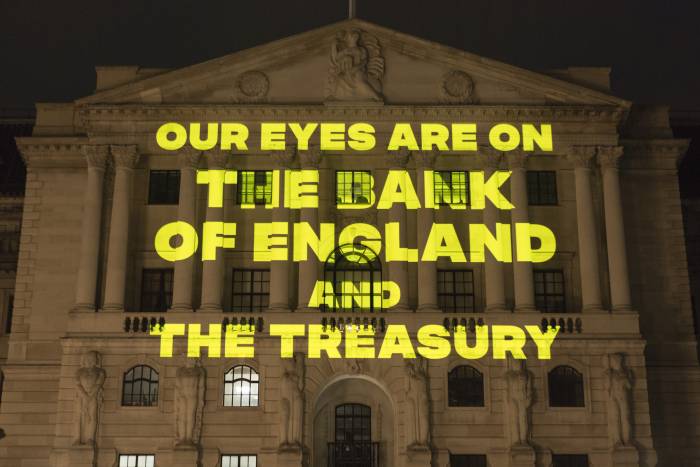 Night-time projection by climate activists on the Bank of England.

We need to change the whole system.

Central banks like the Bank of England sit at the heart of the system. They oversee the activities of commercial banks, and they’re responsible for keeping the economy stable- so they can and should be doing more to rein in the reckless lending of banks like HSBC and Barclays.

At the moment, not only are they falling short in their job as a regulator. They’re also making the problem worse by pumping tons of money into the economy as part of their response to the Covid crisis – with no restrictions on where that money can go. Billions of pounds of public money are being used to prop up some of the world’s most polluting industries.

“Billions of pounds of public money are being used to prop up some of the world’s most polluting industries.”

It’s scandalous, and it’s nonsensical – especially because this money could be used to invest in the solutions that we know we need. Solutions that can help to address social and economic injustice as well as climate breakdown. Critics of ideas like a Green New Deal ask where we can possibly find the money needed to pay for it. Well, here’s your answer.

Sign now to tell the Bank of England: Stop Funding the Climate Crisis!