Our banks are accelerating climate breakdown, with the support of those in charge. Together we’re pushing Bank of England Governor, Andrew Bailey, to stop funding the climate crisis and to protect our future.

Find out how Join us

Since the Paris climate talks in 2015, commercial banks around the world have poured a staggering £2 trillion into coal, oil and gas.

Despite the escalating climate crisis and commitments from governments everywhere, big UK banks like Barclays and HSBC have continued to recklessly fund the fossil fuel industry– and they’re showing no sign of slowing down.

These banks are out of control, but there is someone who can stop them.

We’re calling on Andrew Bailey, Governor of the Bank of England to:

Action at the Bank of England with youth strikers

It’s up to us to stop banks from funding climate breakdown. Over the next year, we’ll be testing new ways to disrupt big banks and can cut off finance flows from the UK to climate-wrecking fossil fuel projects around the world.

The Bank of England is a huge target. But unlike Barclays, HSBC and the other commercial banks – they’re accountable to us, the people.

The Bank of England could cut off the finance flows of UK money to polluting industries and fund the future we need.

We’re calling on the Bank of England Governor, Andrew Bailey: Stop funding the climate crisis and regulate the banks that do.

Dear Andrew Bailey, Governor of the Bank of England

Thank you for adding your name! 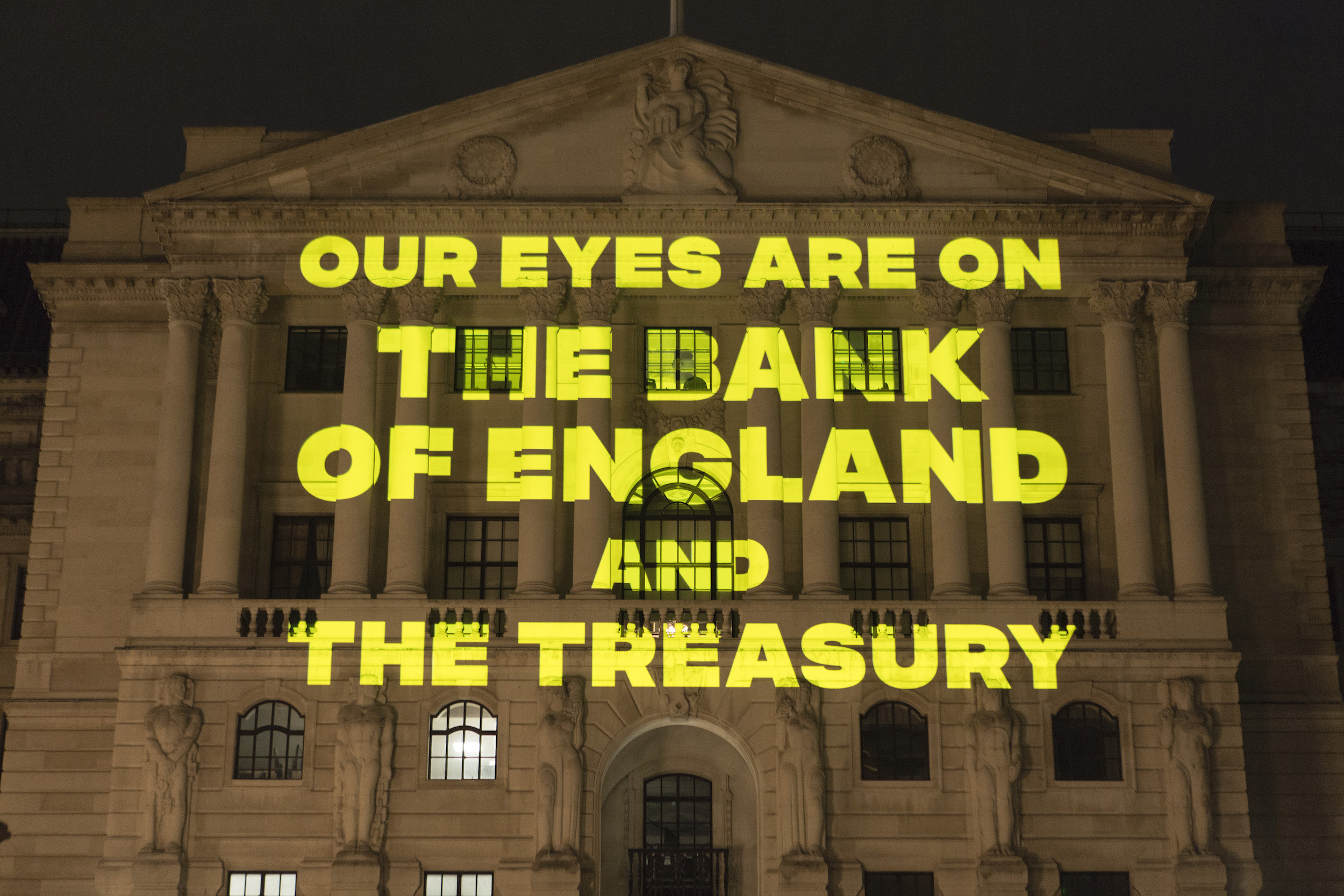 The Bank of England could cut off the finance flows of UK money to polluting industries and fund the future we need. We’re calling on the Bank of England Governor, Andrew Bailey: Stop funding the climate crisis and regulate the banks that do.

How the world of banks and finance works isn’t always communicated clearly – particularly by those in power. But fear not, we’re on hand to answer some of the questions you might have right now:

The Bank of England is the UK’s central bank, sitting at the heart of the financial system. It’s the bank for banks, the ‘lender of last resort‘, and the overseer of the UK’s financial sector.

The Bank of England is responsible for monetary policy, which means that it controls the supply of money and sets interest rates, aiming to limit inflation and keep prices stable. It also oversees the banking system: by lending money to commercial banks and regulating them to ensure that their actions aren’t creating risks for the economy.

What also makes them different from a commercial bank, such as Barclays, is that they are a public institution, accountable to the government and the people – not private shareholders.

Check out this explainer for more.

The Bank of England’s highest decision-making body is its Monetary Policy Committee. This group influences how much money is in the economy, which they do by setting the interest rate (how much it costs to borrow money) and also by creating money through what is known as ‘quantitative easing‘.

The Monetary Policy Committee includes the Governor of the Bank of England (Andrew Bailey), three Deputy Governors, the Chief Economist and four external members. The Governor is appointed by the Queen (that’s right) following the advice of the Prime Minister and the Chancellor of the Exchequer. The Governor then appoints the Deputy Governors and Chief Economist, whilst the Chancellor appoints the external members. So whilst the Bank of England often claims to be apolitical, these appointments (and the type of policy they support) are very much influenced by politics.

Central banks are responsible for managing the supply of a particular currency (for the Bank of England, it’s the Pound). That means that they always have the option to print more money. Or, more precisely, they can just add some zeros on a computer, which represents more money on a balance sheet. Their job is to keep prices stable, so they’re normally very careful about how much money they create, because creating too much could cause inflation where the currency loses its value. But in moments of crisis, when there just isn’t enough money flowing through the system, they are the ones who can fix that.

The UK’s big banks are clearly out of control. To give one example, Barclays recently increased investment in fossil fuels to a staggering $24.6billion over the first nine months of 2020. This is despite them making their own “Net Zero” pledge earlier in the year, to much (self-professed) fanfare.

But the UK is also home to lots of inspiring finance activism, ranging from action against the criminal activities of big banks to the UK-wide Divestment movement. We act as in unison with – and as a complement to – these inspiring activists.

The Bank of England makes sense as a target for a number of reasons. Firstly, the Bank of England is a publicly accountable institution. They are accountable to the Government who are, in turn, accountable to the electorate. The Bank of England is also supposed to regulate our financial system. However, the doctrine of the last 40 years has been to leave everything ‘up to the market’, which leaves commercial banks to do what they like. This indifferent approach to reining in private finance caused the 2008 financial crisis and we now see it continuing the climate crisis – as banks like Barclays face no consequences for their planet-destroying activities.

We are calling for the Bank of England to step in and referee this situation. Of course, you not only need a good honest referee but you also need some good rule-makers. The rule-makers in this case are the UK Government. So whilst we draw attention to the Bank of England, this is also with an eye towards changing the rules of the system – a system that places short term profit before collective wellbeing.

It’s absolutely right that governments and public institutions should prioritise the COVID-19 response, and do everything they can to protect people’s health and financial security. But the coronavirus crisis has hit when we’re also facing a climate crisis, which hasn’t become any less urgent. So the question we have to ask ourselves isn’t whether we should prioritise one crisis or the other. It’s how we can tackle the two together.

We say that these issues are intimately connected. One thing that this crisis has made clear is that ‘business as usual’ – with poverty pay, extreme inequality, decimated public services and climate breakdown – just simply was not working. Boris Johnson knows the system is +broken, which is why he co-opts the language of social justice movements by claiming that he will ‘Build Back Better’. But we also know that he’s not serious. As the 2008 financial crisis and the current botched handling of the Covid-19 pandemic showed, the government favours their own narrow class interests, not those of the population. So in a sense, the fight is already on. Will we further enrich those that benefit from ‘business as usual’ or will we instead build economies that are more resilient, more fair, and more sustainable? Next year, the global 350.org community is doubling down on our goal to end fossil finance. In Europe, we’re keeping the spotlight on central banks. Here’s a look at how we responded to a campaign survey. Big Banks like Barclays and HSBC are out of control. Since the UN Climate talks in 2015, commercial banks have continued to recklessly fund the fossil fuel industry, pouring a staggering £2 TRILLION into coal, oil and gas – and they’re showing no sign of slowing down.