Join the movement for a

It’s time for the government to step up and deliver a real plan for health, for jobs and for climate action.

We are people from all walks of life coming together to win a brighter future.

From summer heatwaves to winter flooding, wildfires to hurricanes – the impacts of climate breakdown can no longer be ignored.

Here in the UK and around the world, the communities being hardest hit are those already struggling and who are least responsible for climate breakdown – especially poor and working class people and communities of colour.

Coronavirus has laid bare the shocking scale of inequality and poverty we live with. After this pandemic, we can’t just go back to business as usual – to a system that puts the profits of a few above a safe climate and the health and wellbeing of us all.

Wait, what is the Green New Deal exactly?

The Green New Deal is a ten year game-changing government plan to tackle climate breakdown and build a world where all of us can thrive. It’s a plan to:

We have the resources to achieve these things, and we know that the majority of people are behind us. But right now, we’re being held back from this future by the tiny minority who benefit from keeping things as they are, and by politicians who serve their interests ahead of ours.

The Green New Deal Bill has been introduced in parliament by a group of supportive MPs as the first step towards winning a Green New Deal. The Bill itself won’t deliver the entirety of what we need but it’s a first step, and gathering support for it among MPs is crucial to our plan to win.

So what’s the plan?

I have more questions

To win a Green New Deal we need:

We know that winning a Green New Deal will be harder under a hostile government. But we don’t have time to wait around. By focusing on building a powerful base of support, we set the stage for the Green New Deal to be won as quickly as possible.

History shows that we can’t sit back and rely on politicians to deliver the Green New Deal by themselves – the kind of change we’re calling for needs people to stand up and fight for it.

The movement for a Green New Deal is growing and everyone has a role to play. We know the majority is already on our side; if we unite in our masses – we can turn that into a power no politician can ignore.

Right now, there are three key ways you can get involved in fighting for the Green New Deal:

The Green New Deal is named after the New Deal – a US government programme created in the 1930s as a response to the Great Depression that invested in huge job creation and infrastructure programmes, as well as introducing new laws that regulated finance and built a social safety net.

The ‘Green New Deal’ was coined by a group of UK-based economists in 2008 who saw the potential in a programme like this to tackle both climate change and the financial crisis. While the idea didn’t really catch on back in 2008, the plan was revived in 2019 in the US by young climate activists from Sunrise Movement and newly elected politicians like Alexandria Ocasio-Cortez.

It’s important to emphasise that the Green New Deal is not a single government policy or law – though it will require the passing of many individual laws. Rather, it’s an agenda for the whole of government – shaping what government does across departments and sectors and how it spends money.

That might sound big, and that’s because it is – the Green New Deal is an ambitious plan at a massive scale. But to tackle climate breakdown and build an economy that works for all of us, tinkering round the edges simply isn’t an option.

There are currently no proposals coming from our government that come close to the ambition and scale of the Green New Deal. However there are people working in parliament to push for a Green New Deal. This comprehensive report from the Green New Deal Group (a group of MPs, economists, journalists and climate advisors) accompanies a Bill currently seeking support from MPs.

The Green New Deal Bill has been written by a group of supportive MPs alongside civil society groups, scientists and trade unions. It sets out a pathway towards winning the Green New Deal that we need. MPs can show their support for the Bill by signing an ‘EDM’ – check out who has signed on the parliament website.

A number of think-tanks have also done lots of work building comprehensive policy papers on what the Green New Deal would look like, how to make it happen, how to pay for it, and more. Check out some of their work here:

Got a question that isn’t answered here? Get in touch! You can find our details on the About page.

We need a Green New Deal

The Green New Deal is a government-led plan to tackle climate breakdown and build a society where all of us can live better lives.

We are people from all walks of life coming together to win a brighter future. The kind of change we’re calling for is big and ambitious – it needs people everywhere to stand up and fight for it.

Over the next 6 months, we're running a huge series of trainings to grow the Green New Deal movement and kick off campaigning in towns and cities across the UK.

Sign up to show your support for the Green New Deal, and be kept in the loop with the campaign.

The Green New Deal is a plan to:

Read more about the campaign on the 350 UK website >>

Thank you for joining the call for a Green New Deal in the UK! Now here's some next steps: 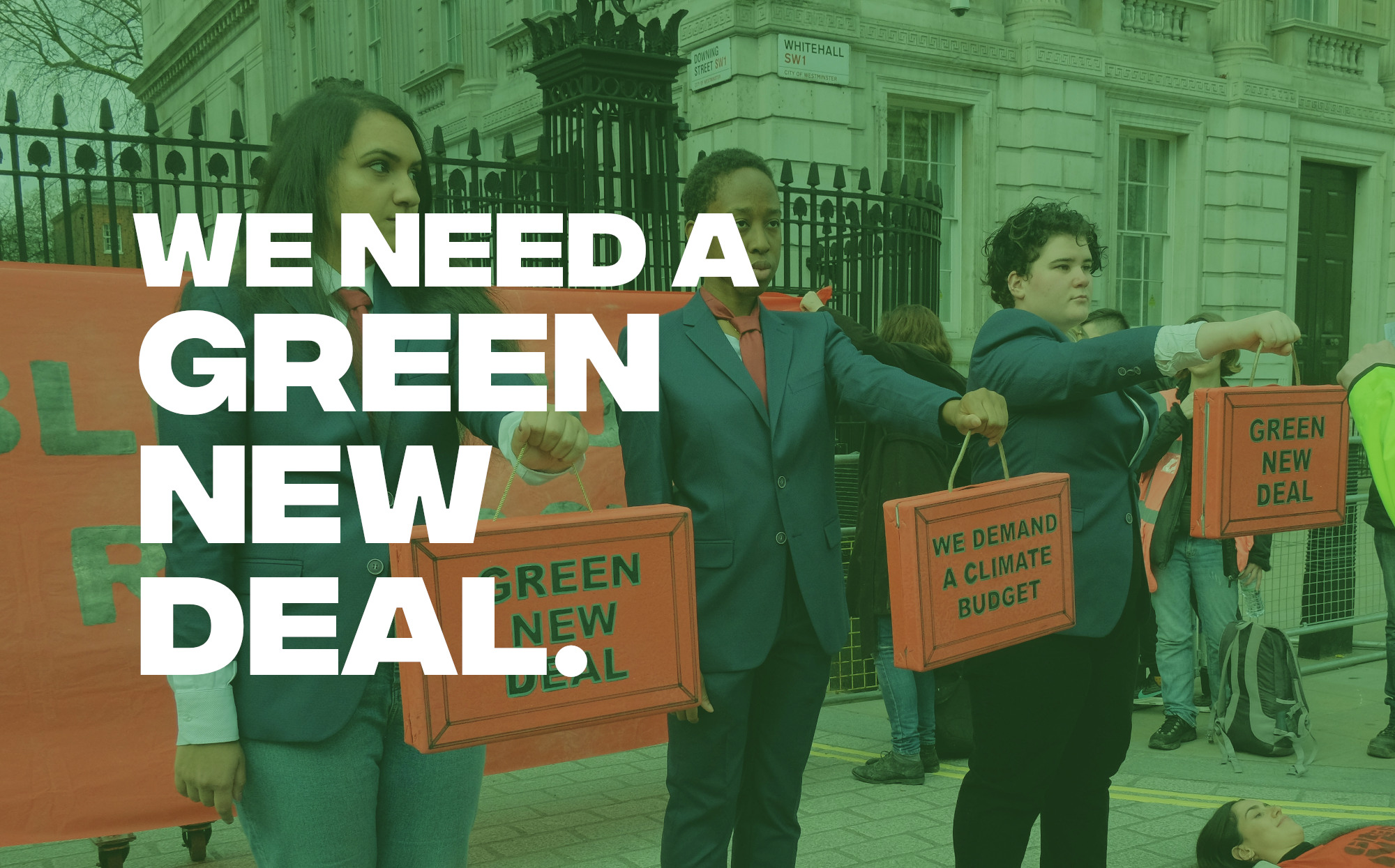 We need a Green New Deal

Sign now and join the movement for a Green New Deal in the UK: we have ambitious things planned and need everyone to get stuck in >>

Show your support for a Green New Deal

Working with the movement and our partners, we have some ambitious plans for 2022 – including a huge programme of trainings, actions up and down the country, and new research on what a Green New Deal would mean in the UK.

Sign up to show your support for the Green New Deal, and to be kept in the loop with everything that’s happening, and how you can get involved.