We kicked off 2021 with a dose of hope. In Dare to Hope, 350 staff shared their aspirations for the year ahead, emphasized the need for an end to business as usual, and underlined the fact that we’re stronger together. In February, Urgewald and a group of more than 25 civil society organizations, including Reclaim Finance, Rainforest Action Network, and 350.org, published groundbreaking research on the financiers and investors behind the global coal industry.

The report showed that, in January 2021, 4,488 institutional investors held investments totaling US $1.03 trillion in companies operating along the thermal coal value chain worldwide. Among the investors covered by the research are pension funds, mutual funds, asset managers, insurance companies, commercial banks, sovereign wealth funds and other types of institutional investors.

In March, Civil society organizations and people’s movements from Asia, Europe, North America, and Australia launched a “Fossil Free ADB” campaign to pressure the Asian Development Bank (ADB) to end its financing and support for gas, coal and oil, while it was in the process of revising their energy policy.

The Fossil Free ADB coalition released a letter calling for the Bank to align with what’s needed to limit warming to 1.5ºC and end its financing for all fossil fuels. In April, a series of climate actions targeted Japan for its continued support of the global coal industry. 350 Japan led the “Four Critical Years: Act Now! Protect Our Environment and Future” (or Ato4Nen) campaign, urging the country to introduce more ambitious energy policies.

In Japan, an activism tidal wave is determined to wipe out dirty energy

Teaming up with Fridays for Future activists, they conducted a wave of actions that called on political and industry leaders to cut fossil fuel financing for good.

Later, on Earth Day, the Biden Administration kicked off the first day of the Leaders Summit on Climate with 40 other countries. At the Summit, the US pledged to cut emissions by 50-52% by 2030, with Japan committing to 46% and Canada 40-45%. 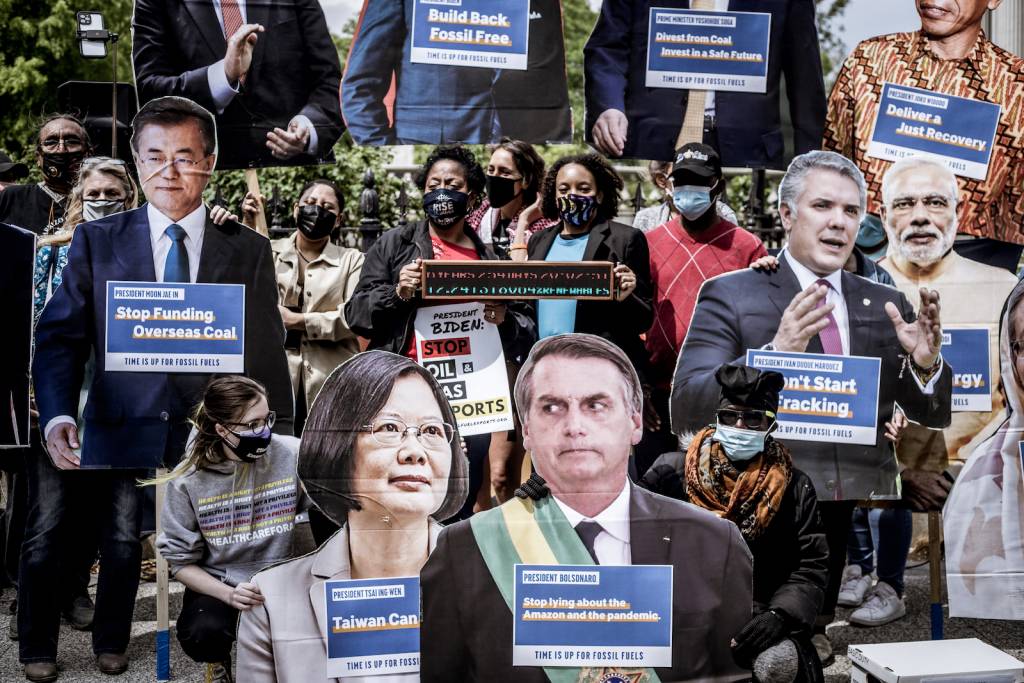 In May, 350.org called for an end to development on the Rampal coal plant, and enact a Green New Deal for Bangladesh, highlighting its immense threat to the Sundarbans mangrove forest and the opportunity to cancel coal as Bangladesh embarked on drafting its Energy Master Plan.

The best time to stop the Rampal coal plant is NOW!

Also in May, tens of thousands of people were forced to evacuate as Severe Cyclone Tauktae hit the west coast of India, causing widespread damage exacerbated by climate change. As the Arabian sea continues to warm due to increased carbon emissions, cyclones like Tauktae will become the new normal without climate action.

The driving force of Cyclone Tauktae: Warming of the Arabian Sea

Later in the month, Cyclone Yaas caused additional devastation in the region — this time in Bangladesh and on India’s east coast.The cyclone led to the evacuation of 1.1 million people and came as the region continued to grapple with the Covid 19 pandemic.

In June the Biden administration declared support for waiving Covid-19 vaccine patents. Shortly afterwards, the IEA called for an end to new coal, oil, and gas development, and the G7 announced their intention to end funding for overseas coal.

End patents to tackle vaccine inequality and the climate crisis Japan attended the G7 Summit in London despite continuing to fund coal plants in Bangladesh. One of these is the Matabari Phase 1 coal plant funded by JICA, which has led to mass displacement, unethical practices, lack of compensation, and will result in severe health impacts for residents.

As Bangladesh reels from continued climate-induced disasters, Japan would do well to support renewable energy development and help the country leapfrog towards a sustainable future.

In July we looked back at how some of our favorite mascots have made unlikely, but effective, climate warriors. Climate activists and their allies—however unlikely—play an indispensable role in shifting the discourse to one that centers people over profit and local voices over official narratives. From T-Rex to Pikachu, this was a celebration of the creative ways that peaceful protest can be conducted and the ability for pop culture icons to transcend domains effectively.

T-Rex and Pikachu are the Climate Champions We Deserve On July 5th, Indonesia’s Bank Negara Indonesia (BNI) turned 75 years old. We took this opportunity to point out how the bank continues to fund fossil fuel projects in Indonesia, and point out its links to university campuses across the country which present an opportunity for added pressure on BNI to divest from fossil fuels.

This year, MUFG was the primary target of a coalition of NGOs who employed a variety of bottom-up and top-down tactics to achieve climate commitments from Japan’s largest financial institution. We highlighted how at the banks’ annual AGM meetings, 350 Japan successfully employed top down and bottom up tactics to extract tougher climate commitments.

From above and below, activist corner MUFG – Asia’s dirtiest bank

For World Water Week in August 2021, we paid tribute to activists protecting water across the region and the deep links between climate justice and water security.

On our Watery World and the Women Protecting the Himalaya In September we looked back at the Asia Solidarity Lab, which took place between August 26 and 28 2021, drew in over 1000 registrants from over 60 countries, an immense achievement and show of regional solidarity for the first event of its kind hosted by 350.org.

Looking back at the Asia Solidarity Lab

In Democracy in Decline: Impacts for climate justice we looked at the importance of democratic spaces for achieving climate goals and the challenges associated with activism in different parts of the region.

Later in the month, China pledged to end funding for overseas coal. We saw this as a win for people power.

China’s coal declaration is a win for the climate movement

However exciting, the announcement called for further details on how and when the plan would be laid out, detailed here: Late September was time for the Global Climate Strikes. Climate activists around the world mobilized in person and online as of part Fridays for Future’s global climate strike under the rallying call #UprootTheSystem. Here we documented the biggest actions across the region. In October, we launched the Go Clean ICBC coalition, a global network of civil society organizations and concerned individuals banded together to oppose ICBC’s financing of coal projects. Following China’s pledge of the previous month, the coalition calls on people power to help end the reign of fossil fuels.

Let’s Get ICBC to Go Clean

Later in the month, 350 Pilipinas hosted a dragon dance outside the Chinese embassy in Manila, rallying support for Asian leadership on climate action for COP26.

The dance symbolized the opportunity for renewal — highlighting that the time to act is now.

In conjunction with the COP26 climate talks in Glasgow, a series of mobilizations were led by young people across Asia, demanding an end to empty promises and false solutions. We tracked the biggest youth-led actions across Asia: Asian Youth Demand Real Climate Action Typhoon Rai was the 15th major weather disturbance to hit the Philippines this year, and was classified as a super typhoon due to sustained winds of 120 miles per hour and gusts of up to 168 miles per hour —a designation similar to a Category 5 hurricane in the United States. The typhoon is currently moving over the sea on a path towards Vietnam, bringing with it heavy rains.

The event served as a reminder that we do have a long way to go, and that we cannot afford to give up the fight.

We wish everyone a safe, happy and healthy new year, and look forward to a 2022 that brings us further down the road towards achieving climate justice.