In January 2016, hundreds of people from all across Canada mobilized to demand an overhaul of the National Energy Board’s pipeline review process. 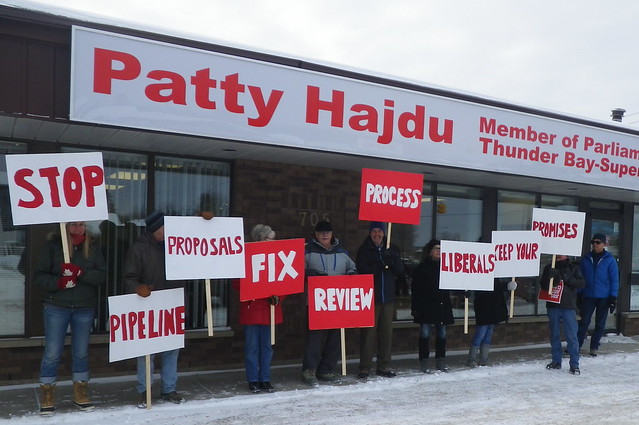 Two weeks after these actions began, the government announced it would implement a ‘climate test’ for new fossil fuel projects and adopt more measures to consult Indigenous peoples.

This was a big win for this movement. But a serious commitment to climate action and Indigenous consultation would stop these pipelines in their tracks. No tar sands pipeline can pass a serious climate test — particularly if Canada keeps its commitment to limiting warming to 1.5C.

What the government’s commitments really mean is up to us. When we organize, we have a big impact — which is why there’s no better time to crank up  pressure to scrap pipeline projects, freeze tar sands expansion and invest in a clean and just economy than right now.

What to Expect for the People’s Injunction

Why people across Canada are planning to take action in January 2016.

Standing Up To Broken Pipeline Reviews

A summary of the actions taking place across Canada.

How we did it — Read our plan!

This project was founded on principles of solidarity, inclusivity and alliance-building. We wanted to have an approach that supported and invigorated people’s own initiative to take action across the country during a pivotal moment for pipeline reviews. We put out guiding principles and an open-ended callout for anyone to organize locally and seek support, letting the movement lead — that’s how we weaved together vibrant, bold, creative actions in different communities. We took measures to encourage actions to be  as open and inclusive as possible, and asked that they take leadership from Indigenous peoples and impacted communities on the frontlines. We also encouraged actions to be structured in a way that respected allies choosing to participate in the NEB reviews. With our guiding principles,  we also strived for accountability by having organizers and participants take responsibility for any consequences resulting from their actions and sustaining a commitment that the actions would cease if reviews for the Kinder Morgan and Energy East pipelines were suspended or cancelled.

What is the People’s Injunction?

An injunction is defined as an “order that restrains a person from beginning or continuing an action”. The People’s Injunction is a pledge from people across Canada that if the Prime Minister and this government do not follow-through on their promise to overhaul the review of pipelines to consider climate change and community voices, we will prevent them from continuing the reviews.

This plan is inspired by the People’s Intervention, a campaign to demand that the NEB include climate impacts and community voices in its review of Energy East. It gathered over 100,000 messages to the NEB demanding a climate review, and nearly 2000 applications to speak on the climate impacts of the pipeline. The People’s Injunction is an escalation inspired by that original strategy towards the goal of freezing tar sands expansion and keeping fossil fuels in the ground.

What does signing up on this page mean?

Signing the People’s Injunction means that if the Prime Minister and this government do not cancel or suspend these reviews by January 15, 2016 you will consider joining or organizing an action in your community to force the Prime Minister to keep his word and stop the approval of pipelines under the broken, illegitimate NEB process. We will be in touch in the coming days and weeks with information about action plans, how to organize an action, resources, toolkits and more.

Why are actions starting on January 18th?

What kinds of actions will take place?

In early January, we’ll be releasing action tools that outline ideas for actions, but we’re encouraging any groups who want to organize People’s Injunction actions, following the principles above, to take the lead and organize actions in their community. Actions might look like marches, rallies, sit-ins and other creative actions and we will be finding ways to connect interested people with organizers.

Can I organize an action in my community?

YES! We’re preparing resources and lining up support for actions as you read this. More information will be posted soon. If you’re part of an organization or group that wants to take the lead on an action, or support actions in your community, click here.

What kind of support is there for these actions?

Organizers are working hard on series of tools that will be published as soon as possible. We are also working with groups across Canada to secure a range of support for actions and will follow-up with everyone who signs onto the People’s Intervention pledge to share more information in the coming days and weeks.

Who is organizing these actions?

What did the Liberal government commit to on the campaign trail?

During the 2015 federal election campaign the Liberal Party, in their election platform, promised to “replace Mr. Harper’s changes to the environmental assessment process” including a pledge that they “will modernize and rebuild trust in the National Energy Board” and “move towards a system where federal environmental assessments of projects include an analysis of upstream impacts and the greenhouse gas emissions resulting from the projects being assessed”. You can read the full platform here. They also pledged that these new reviews would be applied to ongoing pipelines reviews – like this time, and this other time.