Resisting Keystone XL by building clean energy in the path of the pipeline.

Solar XL is a wave of renewable energy resistance that’s building solar arrays directly in the route of the proposed Keystone XL pipeline – putting clean energy solutions in the path of the problem.

This 8-minute film shares the stories of the people and vision behind Solar XL. This is bigger than one pipeline. It’s about resisting with clean energy solutions that support communities and protect our climate.

Thanks for taking action.

The Solar XL campaign is building solar arrays directly in the route of the proposed Keystone XL pipeline – putting clean energy solutions in the path of the problem. The campaign launched this summer ahead of the Nebraska Public Service Commission’s hearings on whether to grant a construction permit to TransCanada, the company behind Keystone XL, in the state.

With support from crowdfunding, solar arrays have already been built at multiple locations along TransCanada’s preferred Keystone XL route in Nebraska on the land of farmers and ranchers. On November 20, Nebraska’s Public Service Commission rejected that route, but granted a permit for an alternate route for the pipeline. Solar XL is continuing to resist the Keystone XL pipeline with new installations — to make a donation, click here.

What’s next for the Keystone XL fight?

On November 20, the Nebraska Public Service Commission rejected the preferred route for the Keystone XL pipeline, but granted a permit for an alternate route through the state. This creates many more obstacles for TransCanada, the company behind Keystone XL, and the pipeline is far from a done deal, but we must continue to fight. TransCanada has asked the PSC to reconsider its decision, while Nebraska farmers and ranchers have pledged to continue resisting the project in the courts.

The Solar XL project will also continue with new installations of solar arrays, led by communities on the ground in Nebraska. Meanwhile, Indigenous leaders and their allies launched the Promise to Protect, a call for everyone who can to commit to future resistance along the pipeline route if Keystone XL moves forward. They announced this plan at a gathering in South Dakota for the second signing of a treaty against the expansion of Canada’s tar sands. Some faces and moments from the tour so far. Diverse movements fighting for justice all over the world are growing rapidly in strength and numbers. Can you feel it too? This will be our year. Meet some of the landowners “I am vehemently opposed to the Keystone XL pipeline mainly because of the properties of the contents of the tar sands oil it will carry — this is not your Mother’s crude oil, it is the Devil’s, and it can kill.

We must be focused on clean, renewable energy and America can get along just fine without this foul concoction they call bitumen that TransCanada wants to pipe across our precious soil and water.” –Jim Carlson “The need for the KXL pipeline product is non-existent in the United States. The monetary benefit to the peoples of Nebraska will be gone in 7 years, while the risks to our state are for the life of this pipeline. The installation of wind and solar production in Nebraska will provide many good Nebraska jobs and provide years of cheap electricity for everyone in our great state.” –Bob Allpress. “We’re proud to be able to provide more clean solar energy to the Nebraska grid while resisting the KXL pipeline that threatens our land, water and livelihoods,” said Nebraska landowner Byron “Stix” Steskal, who with his wife Diana owns Prairierose Farm near Atkinson, NE. 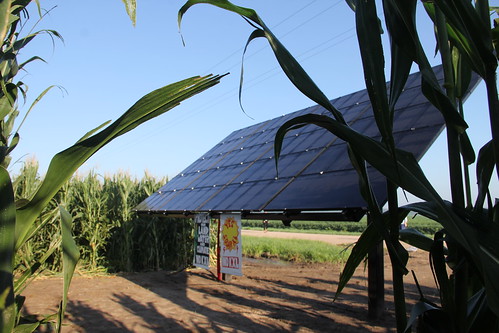